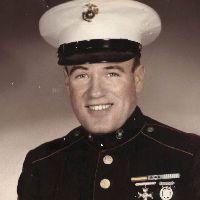 Arthur Augustus “Joe” Allison Sr. 86, of Sheridan passed away May 4th, while in Hospice at the Sheridan VA Medical Center.  Joe was born August 17th, 1931, in Camino California, to William and Inez (Pawson) Allison.Joe was so proud to be a Marine, serving in the Korean War, where he was wounded and earned the Purple Heart, Korean Service Medal with three stars, United Nations Service Medal, National Defense Service Medal, Good Conduct Medal, and the Republic of Korea Ambassador for Peace Medal.  After his Honorable Discharge, he returned to Sheridan where he earned his living as a Union Carpenter until his retirement.Joe married Dona Stanton June 16th, 1953, in Billings Montana; they were married 27 years, had three children, and were divorced 1982.  Joe married Fayanne King July 4th, 1986 in Saratoga Wyoming; they spent 31 years together until her death in 2017.Joe enjoyed the Big Horns, spending his free time hunting, fishing, camping, and boating Lake DeSmet.  He and Fay loved winters in Arizona, enjoying the warm weather, riding in the desert, and panning for gold.  Late in life he especially enjoyed sitting on his porch with friends, feeding the birds and rabbits.Joe is survived by his son James (Michael) Allison of Wyarno, daughter Judy (Patrick) Collins of Cheyenne, step-daughter Sheila (Scott) Hamilton of Sheridan, sister Elaine (Joe) Plessner of Keller Texas, brother Robert Troy of Lapine Oregon, brother Jim Troy of Parker Arizona, 10 grand children, and 19 great grand children.Joe was preceded in death by his parents, wife Fayanne Allison, son Arthur Allison Jr., granddaughter Jaymie Allison, sister Agnes Tingle, brother Billy Allison, and stepson Frank King Jr.A Memorial Service with Military Honors for Joe will be May 15th, 2018, at 2:00 PM at Kane Funeral Home with Pastor Scott Lee officiating.  Inurnment will be in Placerville California at a later date.Joe loved his dogs; memorial contributions may be made to the Sheridan City Animal Shelter, 84 East Ridge Road, Sheridan, WY., 82801 or the Meals on Wheels The Hub, 211 Smith Street, Sheridan, WY 82801.Joe’s family would like to thank the nurses and staff at the Mountain View Living Center in the Sheridan VA.  Their love, attention, and compassion was amazing and appreciated by Joe’s family and friends.  Thanks for all you did for Joe and your service to our country’s veterans.Kane Funeral Home has been entrusted with arrangements.

Date:
Start Time:
A Memorial Service with Military Honors for Joe will be May 15th, 2018, at 2:00 PM at Kane Funeral Home
Location:
Service VideoService Brochure