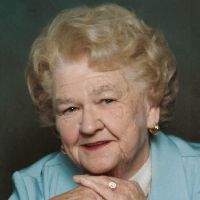 Ada L. Smith, 86, of Sheridan, passed away on Thursday, March 3, 2016, at the Green House Living of Sheridan. She was born on September 3, 1929, in Sturgis, SD, to parents Henry and Alice (Ferguson) Jenkins. She married Charles B. Smith on January 5, 1952, in Sheridan, WY.Ada enjoyed fishing, spending time in the mountains, knitting and crocheting.Ada was preceded in death by her parents, husband, brother, and two sisters. She is survived by her children, Michael L. (Vera) Smith of Pine Haven, WY, Robert C. “Bob” (Jan) Smith of Sheridan, WY, Edward F. (Janie) Smith of Sheridan, WY and Will Smith of Woodstock, IL, six grandchildren, twelve great grandchildren and two great great grandchildren.Memorials to honor Ada may be made to the Sheridan Senior Center at 211 Smith St., Sheridan, WY 82801 or to the Sheridan Dog and Cat Shelter at 84 East Ridge Rd., Sheridan, WY 82801.Per her request there will be no services.Kane Funeral Home has been entrusted with arrangements.