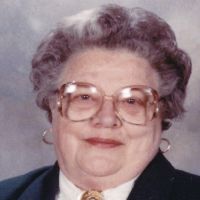 Agnes H. Barbula, 87, of Sheridan, passed away on Friday, March 4, 2016, at the Sheridan Manor. She was born on March 9, 1928, in Detroit, MI, to parents Dominic and Agnes (Rauzi) Bocca. She married Frank Carl Barbula in Sheridan, Wyoming at Holy Name Church.Agnes loved her family and friends. She thoroughly enjoyed cooking and baking. Everyone who visited knew when you went to the Barbula\'s Agnes would prepare their favorite dish or dessert.Agnes\' husband Frank is the love of her life and her family the apple of her eye, they brought joy to her heart.Agnes was also a Prayer Warrior, She prayed her Rosary daily, and would add to her list on request.Phillippians 4:6 Be careful for nothing; but in everything by prayer and supplication with thanksgiving let your requests be made known to God.Agnes was preceded in death by her parents, brother in law, Marvin Barbula, son in law, Allen Dent and grandson, Eric Pepin. She is survived by her husband, Frank, children; Richard (Barbara) Barbula of Jurupa Valley, CA, Janette (Randy) Mort of Billings, MT, Kenneth Barbula of Los Angeles, CA, Gerald Barbula of Billings, MT, Patricia Dent of Sheridan, WY, ten grandchildren, twenty six great grandchildren, two great great grandchildren, sister, Mary Dowling of Sheridan, WY, and  cousins, Mary and Warren Perice of Sheridan, WY, Ed (Misty) Barbula of Sheridan, WY and Betty Turley of Sheridan, WY.Services will be held at 10:00 a.m. on Wednesday, March 9, 2016, at Kane Funeral Home with Father Michael Ehiemere officiating. Burial will be in the Sheridan Municipal Cemetery. A reception will follow at the Holy Name Parish Hall.Memorials to honor Agnes may be made to Holy Name Catholic Church at 260 E. Loucks, Sheridan, WY 8280l. or to the Sheridan Senior Center at 211 Smith St., Sheridan, WY 82801.  Kane Funeral Home has been entrusted with arrangements.