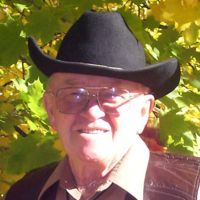 Al Lindborg of Buffalo passed away peacefully in the arms of his beloved wife, Bonnie, early Sunday morning December 1, 2013, after fighting a long courageous battle with lung cancer.Alf Theodore Lindborg was born Nov 1, 1934, to Selma Thompson Lindborg and Peter Anders Lindborg in Harvey, ND. He was raised on their farm with his two sisters, Mildred and Stella who were 10 and 11 years older than Al. He attended high school in Hurdsfield, ND.Al married Darlene “Dell” Schaper and was the father to 3 boys, Randy, Rod, Ron and 3 girls, Candice, Tami, and Tarra. When Al married Bonnie, he was blessed with 3 step-children, Kelli, David, and Jeffrey.For many years, Al enjoyed his jobs working road construction. After moving to Sheridan, he became a ticket agent for Western Airlines. When Western left Sheridan, Al became station manager for Big Sky Airlines. He spent many years as the secretary of the Sheridan Elks Lodge and also served as club manager and Lodge organist.Al had a great love of the mountains, especially the Big Horn Mountains where he loved to hunt, fish and camp. It was natural for Al to share his love of the mountains and the great outdoors with his children and grandchildren.Next to his family, Al\'s greatest passion was his music. He was a natural musician who never learned to read music but played from the heart. He and Bonnie shared not only their love for each other, but their love of music. They were the house band at the Sheridan Elks for over 16 years. Al would often laugh that he and Bonnie \"became gypsies;\" living in Colorado and Montana where they continued their tradition of playing for dances and traveling with the band.Al was baptized in the Lutheran Church. He was a life member of the Elks Lodge 520 in Sheridan, WY. He was also affiliated with the Eagles Club in Kalispell, MT. Al and Bonnie, along with Erwin and Virginia Kubsch, introduced the Big Horn Mountain Polkafest to the Sheridan community.Al was preceded in death by his parents and his daughter, Candice. He is survived by his wife Bonnie Jean, sons Randy (Cathy) Lindborg, Rod Lindborg, and Ron Lindborg, and by his daughters Tami (Doug) Schmidt and Tarra (Matt) Hartl. He is also survived by his step-children Kelli (Ron) Fortier, David (Cindy) Johns and Jeffrey (Shellie) Johns, and his two sisters, Mildred Orner and Stella Kehn. A large family of grandchildren include Erik (Kelli) Lindborg, Emily (Josh) Raden, Dina (Paul) Denton, Tyler Goetz, Justin (Kris) Farrington, Desiree (Clint) Farrington, Jason (Mariah) Farrington, Satchia (Adam) Herring, Clayton and Austan Lindborg, Madison, Tristan, MacKenzie, Treyton, Matthew, Charleigh and Crosby Hartl, as well as step-grandchildren Brandon and Cody Frickey and Samantha and Ethan Johns, Adam (Lindsy) Fortier, Luke (Sandy) Fortier, Justin, Dan and Steve Allen, Ali Binder and Jasmine Cowell, and 14 great-grandchildren, as well as many nieces and nephews.A memorial service for Al Lindborg is scheduled for 1:00 pm Saturday, December 7, 2013, at Kane Funeral Home, 689 Meridian, Sheridan Wy, and will include an Elks honorary ritual ceremony. Following the service a reception, hosted by the DOES, will be held at the Sheridan Elks Lodge. In lieu of flowers, memorials may be made in Al\'s name to the Susie Bowling Lawrence Hospice, 497 West Lott, Buffalo, WY 82834.Kane Funeral Home has been entrusted with arrangements.