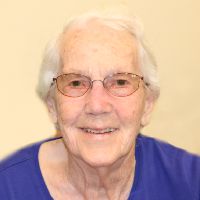 Allwyn Ann Abey Gray, 85, of Sheridan, passed away on Sunday, April 1, 2018, at Green House Living for Sheridan.Allwyn was born on November 5, 1932, to parents Harry Irland and Mary Margaret (Price) Abey in Baltimore, MD. The youngest of five children, she grew up in Baltimore and graduated from Patterson Park High School in 1951. Throughout her high school career, she and her sister Norma excelled at sports. Upon graduation, she went to work as a typist clerk for the Canton Railroad Company.She and her sister continued to play basketball post-high school. When they took on a Women’s Army Corp team, among the spectators was an Air Force serviceman who was destined to become Allwyn’s husband.Allwyn married Larry Eugene Gray on December 15, 1956, in Baltimore. The couple settled in Buffalo, Wyoming, where they lived for the duration of their 42-year marriage. She and Larry were involved in many businesses in the Buffalo-Sheridan area, including The Indian Campground, Top Choice Meats, Mr. R’s Auto Salvage, Super Saver Inn, and others.Allwyn enjoyed knitting, crocheting, walking, swimming, cross country skiing, volleyball, music and dancing. She especially cherished babies and little children, and was loved by them in return. She was devoted to her family and sought out every opportunity to spend time together.Allwyn was preceded in death by her parents, her husband Larry, her siblings (Benjamin, Nicholas, Charles, and her beloved sister Norma Buckley), and her Buffalo area in-laws (Beulah Kostenbauer, Irene Bilbao, Viola Duncan and Juanita Vanderhoef,). She is survived by her children; Janelle Gray (Phil Gilmore) of Sheridan, WY, Wayne (Margi) of Sheridan, WY, Zachary (Tanya) of Sheridan, WY, Susan Gray of Seattle, WA, eight grandchildren, one great grandchild, her treasured caregiver, Kristy Townsend, her brothers-in-law Fred Gray (Buffalo) and Pat Buckley (Maryland), her sisters-in-law Lola Pheasant (Buffalo) and Edith Hibbard (Texas) and numerous nieces and nephews.In lieu of flowers, the family requests that donations be made to the Give Your Heart to a Child Fund at the YMCA of Sheridan, or any other charitable organization that promotes the well-being of children.A memorial and reception will be held at 2:00 p.m. on Saturday, April 14, 2018, at the Sheridan Unitarian Universalist Fellowship at 1950 E. Brundage Lane, Sheridan, WY. Please join the family to reminisce and share memories of Allwyn.Kane Funeral Home has been entrusted with arrangements.