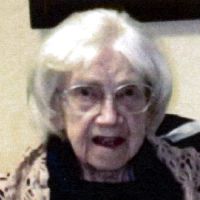 Almira Olive Duncan entered this world on December 4th, 1911. She was the fourth child of nine of James Duncan and Frances Gainer. Ollie was predeceased by all of her siblings, James, Elizabeth, Frances, Archie, George, Gerard, Mary and Grace.Ollie was born in New York but grew up in Providence, Rhode Island. After graduating high school, Ollie entered the Army and became a Women’s Air Corps nurse. She was assigned to a midwestern hospital to care for the boys coming home from World War 2. After the war, Ollie chose to work in the careers taught to her in the service as a nurse and medical science technician. Ollie’s career path took her to Florida, Rhode Island, Connecticut, New York and finally Wyoming. In 1961, Ollie put her career on hold to return to Rhode Island and take care of her aged parents, where she remained for seven years until their passing.Ollie was a lifelong adventurer. She loved the adventure of moving to a new location, securing a new job and meeting new people. After retiring from her position in Lander, Wyoming, she chose to remain there. She said she was in love with the countryside. On her 70th birthday, she celebrated by riding the Snake River Rapids. Several years later, Ollie enjoyed a two week mule ride adventure.Ollie married for the first time in her early 70’s to rancher Frances “Bud” Peterson, they remained together until his death. In her early 80’s Ollie met and married Siebert Buck, a retired entrepreneur. Ollie and Buck relocated to the beautiful Veterans Administration residence and were regaled with the status of being the only husband and wife to reside in the facility together. Ollie once remarked that she enjoyed married life and wish she had done it sooner.Ollie greatly enjoyed the sciences. She took great pleasure in advancing the education of young people, especially her 13 nieces and nephews, and 20 great nieces and nephews. Ollie was a generous educational benefactor of her beloved family and we thank her wholeheartedly.Ollie was greatly loved by her family especially by her nephew Brian and brother in law Walter Neugent who hosted her on her visits to the east coast. and will be sincerely missed by those she leaves behind.Kane Funeral Home has been entrusted with arrangements.