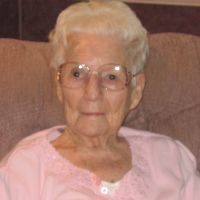 Marie who was born the ninth of ten children on March 9, 1924, a few miles west of Upton, Wyoming, was called Home to be with the Lord on Thursday Feb. 19, 2015.The daughter of Harry and Mae Ellis, Marie was married to Wallace Jorgensen on October 8, 1940. Wallace preceded her in death on September 24, 2001, just 2 weeks shy of their 60th anniversary.She lived in and raised their family mostly in the Upton area later moving to Saratoga, then to Sheridan, most recently living in Montana with family.Having accepted the Lord as her personal Savior in 1955, she became active in the First Baptist Church in Upton where she was the head cook at Bible camp for many summers.Preceding her in passing were all of her brothers and sole sister, her husband and son Carl. Two sons, LeRoy of Texas and Dean of Montana, eight grandchildren and several great-grandchildren, survive her.Viewing will be held at Kane Funeral Home, 689 Meridian, Sheridan, WY, on Friday, February 27, from 12:30 until 1:30 P.M. Followed by a Graveside Service at 2:00 in the Sheridan Municipal Cemetery. Please come and share your memories of Marie. All who knew her will sorely miss her.May she Rest in Peace.Kane Funeral Home has been entrusted with arrangements.