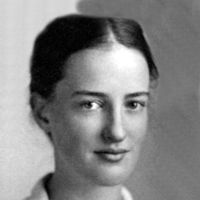 Amelia Forbes Thomas, 101, died on Wednesday, August 31st at the Green House in Sheridan, WY. Amelia was born in 1915 to Waldo Emerson and Ellen Forbes in Milton, MA. After graduating from Milton Academy, Amelia studied German literature at Bryn Mawr College, graduating in 1937. Upon graduation from college, Amelia and a number of friends set out for Wyoming to help her brother, Waldo Forbes, get his ranch set up. This was followed by many years of social justice work, begun at the George Jr. Republic in upstate New York; management of the Neponset Stud Farm for her uncle, W. Cameron Forbes; civil rights activities; working for the American Friends Service Committee; doing as much with dance and music as possible; land conservation; travel hither and thither; not to mention cows, grasses & word origins to pick but a few of her many, many interests and activities. Describing the breadth of her interests and activities throughout her life would take far more space than we have here.Amelia is survived by daughter Suzanna Thomas, her grandchildren Samara (John) Fangman, Louis (Ayuko) Berk, Eli Berk, Lynn Puckett, Tor (Amy) Puckett, her three great-grandchildren, Sophia and Eli Fangman and Walter Puckett, several nieces and nephews, and numerous beloved cousins, quite a few of whom are also named Amelia.A small memorial will be held in the coming weeks in Wyoming, and a gathering for extended family and friends is planned for next summer on the east coast.Kane Funeral Home has been entrusted with arrangements.

Date:
Start Time:
A small memorial will be held in the coming weeks in Wyoming, and a gathering for extended family and friends is planned for next summer on the east coast.
Location:
Tribute VideoService VideoService Brochure