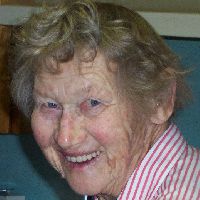 View Service Folder | Click for Video Tribute Annie Varcalli of Sheridan passed away May 3, 2014, three weeks shy of her 93rd birthday. Anna Josephine was born May 24, 1921, the youngest of five children to John Kobielusz and Anna Rucki .She grew up on Dutch Creek and attended Middle Dutch Creek School. Annie married Frank Belus. They later divorced. On February 3, 1949 she married Roxy Varcalli, who adopted her two children, Tom and Pat.Annie worked as a waitress at various cafes, including Zook’s (now Silver Spur) and Carbone’s Pizzeria. From 1973 to 1988 Annie cooked at Woodland Park School. Annie and Roxy also managed the Sale Barn cafe where she baked several pies a week. Several customers would come in just to purchase a whole pie. Beside Annie’s pies, her rolls, and krepleke (Polish Doughnuts) were legendary. She never used a recipe, but would dump flour in a bowl and go from there. She also loved to harvest the wild berries of the season with Marie Kobielusz and Annie Wantoluk and make jams and jellies. While she knew her way around a kitchen, her preferred spot was the outdoors, gardening and taking care of her chickens. Year round Annie hauled wheat and water for them and sold her eggs for fifty cents a dozen. Until very recently Annie still cleaned and crated eggs for the family. In the summer she was a fixture at the Sheridan Farmers Market, visiting with her many friends.Annie is survived by her son, Tom (friend Peg Cullen) and daughter Pat Smith (Keith). She is also survived by four grandchildren: Joe Varcalli, Emily Varcalli (fiancé Eli Wilson), Scott Smith (Marion), Traci Wobbema (Gary); great grandchildren: Alex Smith, Daniel Wobbema, Sarah Wobbema. She is also survived by sister-in-law Martha Kobielusz, her close friends Bob and Genny Stanley and their family and Ann D. Askamit with whom she would often converse in Polish. Annie was preceded in death by her parents, her step-father Joe Bazgier, brothers Joe, John, and Frank Kobielusz and her sister Mary Alderson.A Visitation will be at 6:00 to 8:00 pm on Friday, May 9, 2014 at Kane Funeral Home.Funeral Services will be at 2:00 pm Saturday, May 10, 2014 at Kane Funeral Home with Father Ron Stolcis. Interment will be in the Sheridan Eagles Cemetery. A reception will follow at the Kane Reception Hall.Memorials to honor Annie may be made to Hospice of the Big Horns, P.O Box 391 Sheridan, WY 82801.As Annie was often heard to remark, “All in a lifetime.”Kane Funeral Home has been entrusted with arrangements.