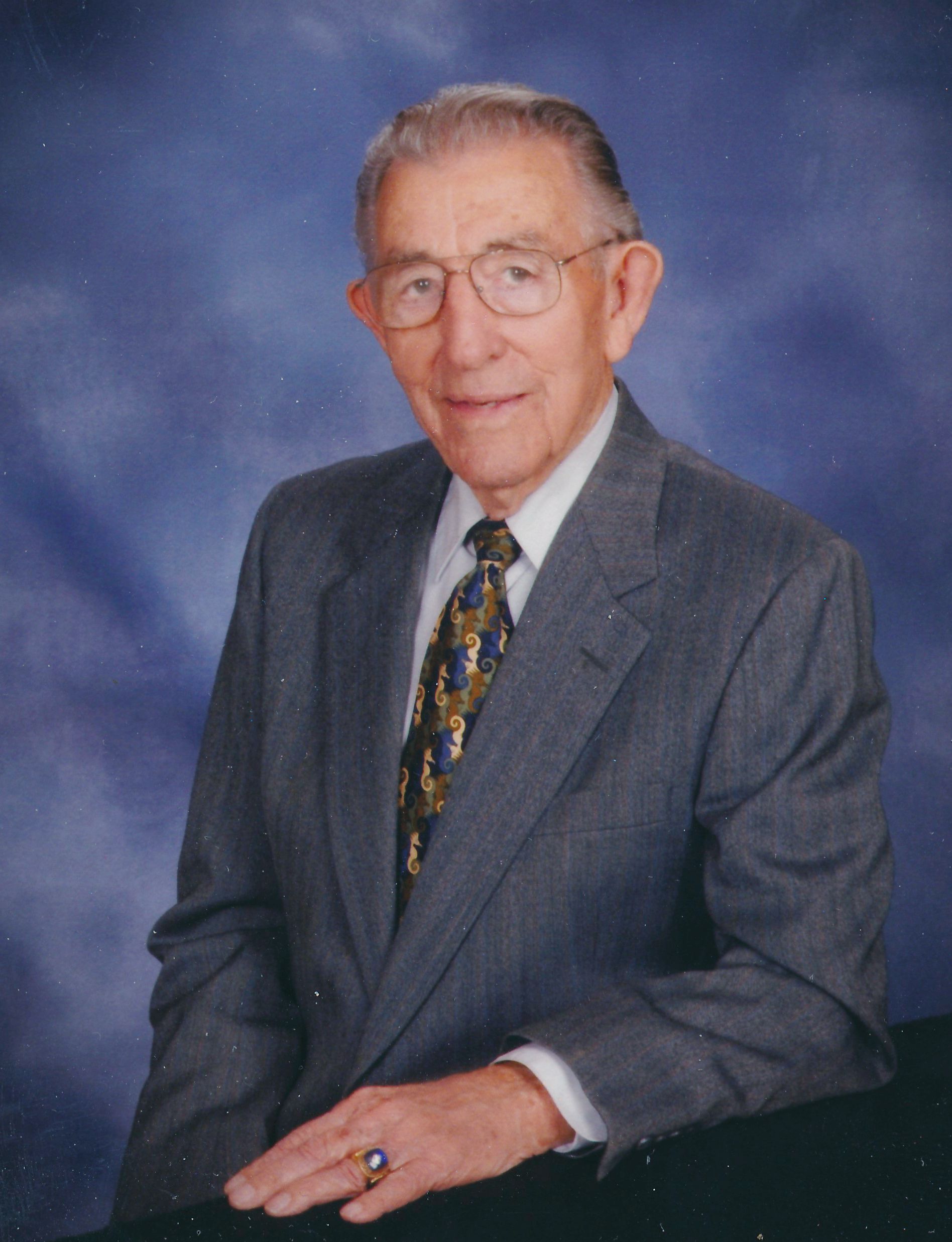 Anselmo Antonio “Sam” Rotellini, born June 19, 1915, in the coal-mining town of Cambria, Wyoming, died peacefully on June 8, 2021, surrounded by family. He was
the second son of Frank and Paudilia (Farella) Rotellini. The family lived in Cambria, WY, Bellaire, Ohio, and Los Angeles, California before settling in Sheridan where Sam
attended Holy Name School and Sheridan High School, graduating with the class of 1935. As a young man, Sam worked for Pay’n Takit (later Safeway). In 1939, while
working in the meat department of the Hardin, Montana, Safeway store, Sam met Clarice Koebbe (Chops) whom he married on October 6, 1940. Sam worked for Safeway in Miles City, Billings, and Red Lodge, Montana. In Red Lodge, Sam briefly worked in the county assessor’s office before moving to Renton, Washington, where he was employed by Boeing on the airplane assembly line during World War II. By 1945, Sam had moved his family back to Sheridan, Wyoming where he worked in the meat market of Boyd’s Super Market before taking a position as a traveling wholesale meat salesman with Wilson and Company of Omaha, Nebraska. In 1947, Sam became a State Farm Insurance agent. He represented State Farm Insurance in the Buffalo area for 25 years and in Sheridan for 50 years until he retired May 1, 1997. As a State Farm Insurance Agent, he qualified for the national President’s Club 21 times.

Never forgetting his humble beginnings nor the difficulties of the Depression years, Sam served his community through many organizations. A member of Holy Name
Catholic Church, Sam was a 4 th Degree Knight of the Knights of Columbus and a past Grand Knight. Sam was a lifetime member of both the Eagles #186 and BPOE Elks
Lodge 520, which recently recognized him as the longest serving current member at 75 years of membership. Sam was a past president of the Lions Club in Sheridan and held various other offices in the local organization. Lions Club International awarded Sam both the Silver Lion Award and the Mellon Jones Fellow for Dedicated Humanitarian Service.

Sam enjoyed golf, fly-fishing and bowling. He was city scratch bowling champion twice, in 1959-60 and in 1975. However, Sam will most be remembered for
his music. Music was an integral part of his life from the time he was a small child playing the banjo in Cambria while his brother Angelo (Rody) played the saxophone.
When Sam returned to Sheridan from Washington, he and Rody started a dance band, The Harmony Kings, and played in all the popular area night clubs as well as high school dances. When The Harmony Kings disbanded in the 1960s, Sam and Clarice enjoyed ballroom dancing.

Since retiring, Sam has served on the Holy Name Foundation Board and the James and Matilda Goar Foundation and volunteered at the VA greenhouse. Sam also
played golf most summer days into his late 90s, playing 18 holes with Ernie as the sun rose in order to be back in their flower and vegetable gardens by 8:30. He shared his produce and his roses with family, friends, and neighbors. For several years Sam was a member of the SheridanAires and the Big Horn Mountain Polka Club.
Anselmo A. “Sam” Rotellini was preceded in death by his parents, his wife, Clarice, his brother, Angelo, and a sister and brother who died in childhood, Adelgisa,
and Augustino. He was also preceded in death by his uncle, Baptista Farella of Newcastle, Wyoming, and seven first cousins in the Farella family. He is survived by his
five children, Diana Rotellini, Renee Meador, Loretta Rotellini, Felecia Rotellini, Samuel Rotellini, and his brother, Ernie Rotellini. Also by his grandchildren Dominico and
Giustino Rotellini-Cataldi, Charles Meador and Amelia Meador Heizer, Anthony Hammond and Felecia Hammond Kutch, Gianna and Gino Rotellini, and fourteen great-
grandchildren. Also surviving Sam are nephews Frank, John, and William Rotellini, niece Mary Beth Rotellini Hanlin, many cousins in the Farella families of Newcastle,
Wyoming; and in-laws, nieces and nephews of the Koebbe families of Hardin, Montana.

A Mass of Christian Burial will be held on Thursday, June 17, 2021 at 1:00pm at Holy Name Catholic Church with Father Glenn officiating. Interment will take place in the Elks section of Sheridan Municipal Cemetery. Reception to follow at the Knights of Columbus.

Date:
June 17, 2021
Start Time:
To honor the life of Sam Rotellini, a viewing will be held on Wednesday, June 16, 2021 from 5:00pm-6:00pm at Kane Funeral Home with a Rosary at 6:00pm.A Mass of Christian Burial will be held on Thursday, June 17, 2021 at 1:00pm at Holy Name Catholic Church with Father Glenn officiating. Inturment will take place in the Elks section of Sheridan Municipal Cemetery. Reception to follow at the Knights of Columbus.
Location:
Tribute VideoService VideoService Brochure