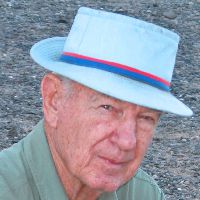 Arnold Jacobson, 98, of Sheridan, passed away on Tuesday, January 5, 2016, at his residence. He was born on November 4, 1917, in Kenmare, ND, to parents Jacob Peter and Carrie (Thompson) Jacobson. In 1933, he joined the Civilian Conservation Corp in California. During WWII, Arnold served in the Army Air Corp.In 1935, Arnold married his first wife, Violet Crystal. They were married for 23 years before her passing. Together they had two children, Robert and Susie. He later married Elizabeth Funder. She passed away in 2006. In 2008, he married Bernice “Betty” Turley. They remained married until his death.Arnold invented his first fishing lure, the spin-a-lure in 1955, followed later by the stream-a-lure and the wobbler. In 1956 he launched Spin-A-Lure Mfg. which is still family owned. Arnold enjoyed fishing, hunting, backpacking, arrowhead hunting, being out-of-doors, RVing, playing cards and spending winters down South. He was a member of the Elks Lodge, Holy Name Church and the Archaeological Society, participating in many digs with Dr. Frisom of the University of Wyoming.Arnold was preceded in death by his parents, two wives and ten siblings. He is survived by his wife, Betty, a son, Robert (Lynda) Jacobson of Sheridan, daughter, Suzanne Jacobson of Sheridan, a 104 year old sister, Evelyn, of Upland, CA, ten grandchildren, twenty four great grandchildren, and seven great great grandchildren.A Visitation will be held from 6:00 to 8:00 p.m. on Monday, January 11, 2016, at Kane Funeral Home. Mass of the Christian Burial will be held at 10:00 on Tuesday, January 12, 2016, at Holy Name Church. Interment will be in the Sheridan Elks Memorial Cemetery with a Reception to follow in the Parish Hall.Kane Funeral Home has been entrusted with arrangements.