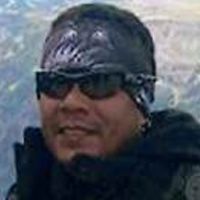 Arthur Michael Perez, 41, of Sheridan, passed away on Sunday, May 20, 2018, at the Sheridan Memorial Hospital.Art was born August 16, 1976, in Torrington, WY to Isabella and Ambrosio Perez, Sr. Art graduated from Torrington High School in 1994, and from Wyo Tech in 1996. On August 18, 2012, Art married his pride and joy, Jandy Lyn Wilson, in Deadwood, SD, on his second pride and joy, his 1976 Shovel head.Art was a man of many talents and had an ambitous drive. He loved to learn new things and to give “it his all”. Art owned A & E Trucking with his brother Eddie for several years, running cattle and grain. He later joined his brother JR. in his company, JD Construction. His brothers inspired him to want to own his own company. In May of 2016, Art and Jandy purseud Arts dream of owning his own Exterior Construction business. Art and Jandy loved to ride their motorcycle in numerous poker runs, and on Saturday and Sunday afternoons with their “biker family”, for some much needed wind therapy. Most of Arts talents resided in a garage, whether it was tinkering on a motor of any kind or woodworking. Art was an avid hunter. Always wanting the biggest kill. Many bets have been won and lost over the years, but mostly, he hunted to provide for his family.Art was known for his big heart and giving the shirt off his back. He touched many people\'s lives and will be greatly missed by all.Arthur is survived by his wife Jandy Perez, their two children, Nathen and Katelyn and grandaughter Addison, all of Sheridan, mother-in-law Ronda Wilson (David) of Sheridan, father-in-law Tom Wilson (Kim) of Sheridan, and two brothers-in-law Jason Wilson of Sheridan and Josh Morris (Kayla) of Sheridan, WY, parents Isabella and Amrosio Perez, Sr., of Torrington, WY, brothers, Edward Perez (Sharon) Ambrosio Perez, Jr. (Debbie), sisters, Veronica Mae and Patricia Ann, several nieces, nephews, aunts and uncles from various places.Arthur was grateful for all the people in his life and would give them the credit deserved for influencing him throughout his life. Art always said “I\'m too dumb to be scared” and he certainly went out unafraid!A Celebration of Life will be held at 10:00 am on Saturday, June 2, 2018, at Kane Funeral Home in Sheridan with Reverend Kevin Jones officiating. A reception will follow from 11:00 am to 10:00 pm at the Marshall Park at the #2 pavillion. There will be black and orange balloons marking area.In lieu of flowers, memorials may be made to the Advocacy and Resource Center, 136 Coffeen Ave., Sheridan, WY 82801.Kane Funeral Home has been entrusted with arrangements.