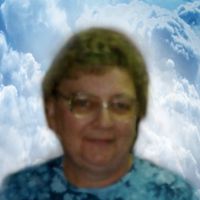 View Service Folder | Click for Video Tribute Barbara (Barb) Ann Eychaner passed into the arms of her beloved Savior September 2, 2014. She was born June 1, 1939 in Hobart, OK to D. Orrel & Vera Mae Geier. They left OK to work on the Geier ranch on Piney Creek the year Barbara was born. Barbara was raised on the Geier ranch and as the oldest of 5 children was often at her father’s side helping with farming, cattle work or other parts of ranch life. She attended Kearny School, graduated from Buffalo High School and then attended business school in Denver, CO. She married John Eychaner on November 25, 1957 (they met on a blind date). They spent their first few years in OK while John served in the U.S. Army where their first daughter Joy was born. They returned to the Geier ranch at Ft. Phil Kearny to live and work as well as adding two more daughters to the family, Cathy and Lois.After the ranch sold they moved to the Wrench ranch where they lived for several years. Barbara often helped with the farming and cattle work alongside the rest of the family. She later worked for several years outside the home before finishing her career at Barcon Inc. Barb’s faith in the Lord as her Savior was the center of her life with family, church & friends being very important as well. She loved to garden and spent many hours in the greenhouse that was built upon her retirement from Barcon. Barb and her husband John, of 56 years, always had a large garden and would share the bounty from it with others. She enjoyed quilting, knitting, and crafts and never seemed to lack for a project to work on.Barb was preceded in death by her husband John, two sisters (Louise Kay and Phyllis Simon). She is survived by her three daughters, Joy (Marvin) Goffena, Cathy Johnston, Lois Eychaner; grandchildren Joshua (Crystal) Goffena, Alli Johnston, Caitlyn (Zach) Anderson, Jennifer Goffena and Austin Eychaner. Great Grandchildren: Nazareth, Zeyden, Zion, Novalee Anderson & Easton Goffena. She is survived by one sister Orlene (Russell) Perritt & brother Marlin (Mary) Geier.A Memorial Service will be held at 11:00 a.m. on Saturday, September 13, 2014, at the Sheridan Wesleyan Church with Pastor Sherman Weberg officiating. A reception will follow at the church.In lieu of flowers, Memorials may be made to the Big Horn Church, (Gideon\'s or Nepal Missions) Box 212, Big Horn, WY 82833, or the Hospice of the Big Horns, Box 391, Sheridan, WY 82801.Kane Funeral Home has been entrusted with arrangements.