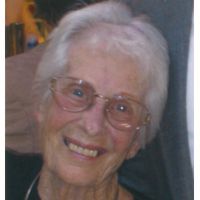 Barbara Jo (Lotspeich) Hampton, 84, of Sheridan, passed away on Thursday, June 6, 2013 at her residence. Born in Chadron, NE to Frank and Irene (Morgan) Lotspeich on March 15, 1929. The family moved back to Sheridan when Barb was 2 years old. She attended school in Sheridan and was a 1946 Sheridan High Graduate.Barb married W.B. (Bill) Hampton on June 19, 1947. After moving around some, they settled back in Sheridan. She retired from the Sheridan VA in 1989 after 25 years as a Nursing Assistant. They raised 5 children.Barb enjoyed many hobbies but, the joy of her life was her family.Barb was preceded in death by her parents and her husband. She is survived by her children: Rhonda Fitzpatrick, Tom Hampton, Becky (Harry) Clark, Jeff (Laurie) Hampton, and Laurie A. Hampton, all of Sheridan, WY, along with 3 grandchildren: Marcie Fitzpatrick, Tyler Hampton and Brian (Heather) Hampton.Graveside Services will be at 10:00 a.m. on Tuesday, June 11, 2013 with Pastor Don Derryberry officiating in the Sheridan Elks Memorial Cemetery. A reception will follow at the Elks Lodge at 45 W. Brundage, Sheridan, WY.Memorials to honor Barbara can be made to the Welch Cancer Center at P.O. Box 391, Sheridan, WY 82801.Kane Funeral Home has been entrusted with arrangements.