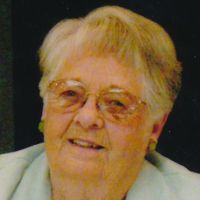 Barbara Lou Jorgenson passed away at Sheridan Manor on February 13, 2021. Barbara was born on July 22, 1927 to James R. Perkins and Helen (Thompson) Perkins. She grew up on the ranch in Sheridan County and was a graduate of Sheridan High School. She received her B.S. And M.S. Degrees from the University of Wyoming in Agronomy Plant Pathology, where she earned a nickname “Potato Perkins”. She gave up a career in science to raise a family after marrying Clyde R. Edwards of Rozet, WY in 1951. They lived in Kansas City, MO and Beltsville, MD and divorced in 1973. Barbara returned to Sheridan and in 1975 married Leroy Jorgenson of North Dakota. He died in 1993.

Barbara worked for many years doing computer accounting for many companies in Sheridan, and especially liked working with veterinarians. She belonged to Akcita Win, Hill and Dale Homemakers, Memorial Hospital Auxiliary, Sheridan County Cattle women, Wyo Theatre Volunteers, and sang with the SheridanAires of the senior center, where she enjoyed games and fellowship. She enjoyed crocheting, knitting, sewing, crossword puzzles, and home decorating.

Barbara was preceded in death by her brother Jimmy and her sister Jo Anne and her husband Chuck Bell. She is survived by two cousins, Marge (Jim) Hamilton and Bill (Carol) Perkins as well as nieces Cinder Destefano, Shannon Dahl, and Sandy Perkins (Marty) Kane. She was known as “Auntie Barbara” to many, and maintained a lifelong loving relationship with sister-in-law Gail Mefford.

Barbara loved Wyoming. She had shot antelope and deer, and had great recipes for wild birds and trout from her beloved Big Horns. She felt blessed with the opportunity to hold great-grandchildren in her arms. Those born in this state represented the sixth generation of Wyomingites.

At her request, Barbara was cremated. A family reunion is tentatively planned for summer 2021.