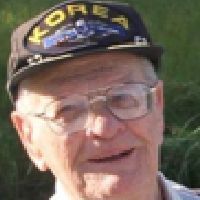 Click for Video Tribute Bernard “Barney” Ross, 83, of Sheridan, passed away on Monday, January 9, 2017, at the Mountain View Living Center at the VA Hospital.Barney was born on July 15, 1933, in Hastings, NE, to Ruby (Harlow) and William Ross. He was married to Irene (Callahan) Ross.Barney was a Korean War Veteran, Combat Infantry Division and was a recipient of the Purple Heart and the Bronze Star. He was a lifetime member of the VFW and a member of the Brick Layers and Allied Craftsman Union. He liked to hunt and fish and camp in the Big Horn Mountains and he loved telling stories. He especially loved his family.Barney was preceded in death by his parents; his wife, Irene; and his brothers, Bill Ross and Roger Rank. He is survived by his children, Linda (Darrel) Brainard, of Upton, WY, Kathy (Jerry) Tillery of Humble, TX, Kenneth “Bobby” (Denise) Ross of Sheridan, WY and Eliot (Shannon) Ross of Buffalo, WY; his brothers and sisters, Ada Joy “Chic” (Jack) Clevenger of Gillette, WY, Phyllis (Ron) Rehling of Portland, OR, Gary (Linda) Ross of Grand Junction, CO, Diane Culhane of Sheridan, WY and his Sister-in-law and fishing partner, Betty Ross of Sheridan, WY, and nine grandchildren and three great-grandchildren.A memorial service will be 11 AM, Saturday, January 14, 2017, at Kane Funeral Home with Doug Goodwin officiating. A reception will follow in the Kane Reception Hall.Memorials may be made to the VA Homeless Shelter, 1898 Fort Road, Sheridan, WY 82801.Kane Funeral Home has been entrusted with arrangements.