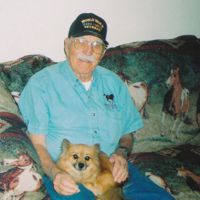 Bernhard “Ben” Peterson, 96, of Sheridan, passed away on Sunday, February 14, 2016, at his residence.Ben Peterson was born in Timber Lake, S.D.  He left the home ranch in 1940 and by hitch hiking and hopping a few freight trains arrived at Santa Monica,CA.  He worked for Douglas Aircraft as a machinist.  He married Alice Cray September 12, 1942.  Ben was drafted into the Army in 1945.  He was assigned to the 7th Infantry Division.  He participated in the mop up operations on the island of Saipan and later in the battle of Okinawa. He was wounded twice and spent several months in hospitals in Guam and Oahu, HI. He was discharged in 1946. Ben was awarded the Bronze Star, Purple Heart with an oak leaf cluster, Asiatic Campaign Medal with two Battle Stars, Good Conduct Medal, the Victory Medal and the Combat Infantry Badge.After the war, he tried ranching in Timber Lake, SD, and farming in Fairview, MT.In 1947, he got his private pilot license and in 1948, his commercial license. He flew as a spray pilot and did some charter flying. He purchased a spray plane in 1949, and went out on his own. In 1950, the family moved to Los Angeles, CA. But Ben came back to Sidney, MT, every spring to continue spraying. When the season was over he would return to CA. He retired from spraying in 1957.After working at Hughes Aircraft as a precision machinist, he opened his own machine shop in 1959. He had contracts with Hughes Aircraft, Air Research and others. He was proud of the part he made for the Surveyor Spacecraft which made the first soft landing on the moon on June 2, 1966. He sold his shop in 1977, and continued to work for the new owner.In 1980, he and Alice moved to Escondido, CA. Ben continued to work in machine shops. When he retired in 1982, he had a small shop in his garage.Ben was proud to be a member of the Civil Air Patrol after he retired. He flew as a mission pilot for drug control on the California Mexico border. He flew a lot of search and rescue missions. He was a mission pilot, check pilot and mentor pilot for the mountain flying courses. He flew a lot of the missions in his 1948 Stinson. He retired as a Lt. Colonel from the Wyoming wing of CAP after 23 years of service. In 2004, Alice was diagnosed with cancer and they moved to Sheridan, WY, to live with their daughter Linda. Alice passed away August 5, 2004. Ben enjoyed helping Linda with ranch work and caring for the animals.He bought a 1947 North American Navion (a poor man\'s P51) and enjoyed flying throughout WY, SD, and to CA several times. His last flight in the Navion was October 9, 2015, at the age of 96. He was restoring the Stinson and had put in a new engine and repainted the fuselage. He was working on recovering the wings up until a month ago. On May 2, 2008, the Federal Aviation Administration awarded Ben the Wright Brothers Master Pilot Award for 50 years of consecutive flying. He was a total aviation fanatic and loved every moment in the air.Ben and his family were touched by the affection and love of the members of Alcoholics Anonymous in which Ben was a member of the fellowship for 36 years.  One of his goals was to be able to share his story one more time on Sunday, January 31, 2016 and he achieved that goal.  He was preceded in death by his parents, his wife Alice; his sister and brother, a niece and four nephews. He is survived by his daughter Linda; Belle, his princess Pomeranian, his nephews Dan (Cathy) Booth, Bob (Diane) Booth, Robert Booth, Ben Booth, Jason Booth, Tom Peterson, Gerald (Lavon) Booth and family; his nieces Lori (Greg) Flaitz and family, JoLeah Booth, Janelle Booth (he was trying very hard to make a Navion pilot out of her); Luann Reyna, Linell Lane, Lynette Grach and Leann Berg; and his sister in law, Evelyn Peterson, brothers in law; Bill (Maria) Cray, Vern (Cheryl) Cray, “adopted son” Carlos Melgosa and his very dear friend who had a very special meaning to him, Kerrie Kimmel. His beloved airplanes, the Navion and Stinson will miss his stick and rudder skills.Funeral Service for Ben will be at 2:00 pm, on Friday, February 19, 2016 at Kane Funeral Home with Reverend Kevin Jones Officiating.  A gathering of family and friends will be in the Kane Reception Hall.  Memorials to honor Ben can be made to the Commemorative Air Force, National Correspondence Center, PO Box 1380, Merrifield, VA 22116-1380* www.CommemorativeAirForce.org or to the Tuskegee, CAF Red Tall Squadron, 971 Hallstrom Drive, Red Wing, MN 55066.Internment will be on Tuesday, February 23,2016 in the Sturgis National Cemetery.Kane Funeral Home has been entrusted with arrangements.