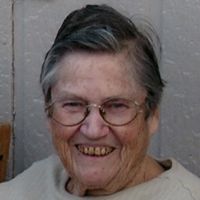 Click for Video Tribute Betty L. (Myers) Geertz, who will be remembered for her sense of humor, kind heart, spunky personality, and meticulous home, passed away on Thursday, July 23, 2015.Betty was born on August 5, 1930, and was one of four siblings: Darlene, Dale, and Lee. She spent most of her childhood in Colorado Springs, Colorado where she met her husband of 66 years, Carl A. Geertz. They were married on April 21, 1947, in Pueblo, Colorado. Together, they had two children Barbara and Carl. The family eventually moved to Sheridan, WY, where they opened Ice Box Grocery, their first of several grocery stores. Together, they later opened Carl’s Supermarket stores in Sheridan and Bozeman, and finally opened Carl’s Super, where Betty enjoyed making “Granny’s homemade fudge and candy.” Through the store, the family was able to enjoy the community that was so special to them and give back by supporting activities throughout town to benefit kids and families.Carl and Betty belonged to the Good Sam’s Club, and for several years, Carl was the Wyoming State Director, taking them on adventures all over the United States. They eventually decided to winter in Yuma, Arizona where they made lasting friendships and spent quality time taking care of their fruit trees, swimming, and traveling to Mexico. Betty enjoyed playing the slot machines and they would travel to Laughlin frequently. In their later years, Carl and Betty lived at Sugarland Ridge and High Gate Retirement homes where Betty enjoyed playing bingo (keeping an endless supply of pennies) and participating in crafts.Betty enjoyed being surrounded by family and always had a story to tell about her grandchildren and great-grandchildren. “Granny” enjoyed taking her grandchildren to the parade, swimming, the Fish Hatchery, and the circus. She was never late to anything. When Granny took the grandkids to the circus, they were there so early, they watched the circus finish setting up! Granny always kept her cookie jar full for her grandkids. She enjoyed teaching her grandchildren how to play cards and board games, baking and sharing her “special recipes” with her grandchildren as they grew older and started their own families.Betty will be greatly missed by her children, Barb Grooms of Bozeman, Montana, Carl E. and Mary (Wiberg) Geertz of Sheridan, WY; her grandchildren, Scott (Melissa) Dunham, Danny (Julie) Grooms, Carl P. (Mary) Geertz, Lori (Matt) Toner, Angela (Sean) O’Leary, Joy(Luis) Segovia; great grandchildren; Riley, Kinsie, and Abby Grooms, Breanna, Carl Z, Austin, and Jayden Geertz, Brady and Casen Toner, Mariah, Ethan, Connor, Aiden, and Nathan O’Leary, and Luis and Azalea Segovia; as well as her many nieces, nephews, and friends. Her husband, parents, and son in-law, Dan Grooms, preceded her in death.A Celebration of Life will be held at 10:00 a.m. on Thursday, July 30, 2015, at Kane Funeral Home. Inurnment will be in the Sheridan Elks Memorial Cemetery with a reception to follow at Kane Funeral Home. In lieu of flowers, please spend some special time with your loved ones.Kane Funeral Home has been entrusted with arrangements.