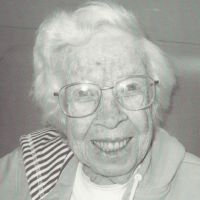 ‍Betty Lee Levi was born November 21, 1925, in Greencastle, IN, to Bernard F. and Wilma P. (McMains) Handy.  She passed from this earth on August 18, 2016, in Bozeman, MT. After graduating from Greencastle High School/Stevens College for Women, (Missouri), she went on to graduate from Colorado College in Colorado Springs, CO. with a major in Psychology and a minor in Physical Education.  It was in Denver, where she met and married Ralph A. Levi on September 22, 1950.  After a short time in Worland, they moved to Sheridan and started their careers and family.  They had three sons, Ralph (Handy), Richard and Robert (Kent). Her husband Ralph passed away in August of 1991.During her time in Sheridan, she taught Women’s Physical Education at Sheridan Community College and served as Dean of Women.  She also was a member of the Sheridan Red Cross, becoming a Water Safety Instructor and taught swimming lessons at the City Pool. Betty served on the Sheridan County Recreation Board, was active at the Sheridan YMCA, a member of St. Peter’s Episcopal Church, Homemakers and the local PEO Chapter AR.  As a dedicated wife and mother, she also worked with her husband at Levi Realty and Insurance, Inc. and always took time to make sure her sons stayed active in whatever sporting events they enjoyed. After retiring in the late 1970’s, she volunteered as a teaching guide at Fort Phil Kearney.Betty was an avid reader and was especially interested in the history of the Sheridan area, General George Custer and Native American History. She loved volunteering in the early days of the All American Indian Days and working with the local YMCA and High School Swim Teams.  Frequently, she would take her grandchildren on field trips to the different historical sites in the Sheridan area.  She also enjoyed playing golf, tennis and bridge, traveling and lunch meetings with her longtime friends. Betty is survived by her three sons, Handy (Kathy), Rick (Cara) of Sheridan and Kent (Sheryl) of Bozeman, MT, her sister Anita Lemmick of St. Petersburg, FL, 11 grandchildren, 14 great-grandchildren and several nieces and nephews.She is preceded in death by her husband, Ralph, her parents, brothers Bernard F. Handy, Jr. and Norman Handy, sister-in-law Merlin Handy and brother-in-law Richard Lemmick.Services will be held at 10:00 a.m. on Thursday, August 25, 2016, at St. Peter\'s Episcopal Church with Father John Inserra officiating.In lieu of flowers, donations can be made to benefit the Sheridan County Public Library at 335 W. Alger, Sheridan, WY 82801 or to the Sheridan Recreation District, Kendrick Pool, P.O. Box 6308, Sheridan, WY 82801.Kane Funeral Home has been entrusted with arrangements.