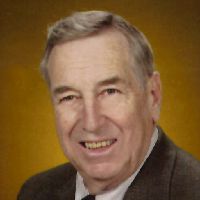 William J. Laya passed away at the Sheridan VA Medical Center, in the presence of his family, on June 9, 2014. “Bill” was born in Kleenburn, Wyoming on September 1, 1930, the son of Joseph T. and Mary (Michalek) Laya. He was a proud life-long resident of Sheridan County.As a boy, Bill spent many happy days around the Monarch and Acme area where he enjoyed hunting and fishing with his brother Jerry. Bill played ice hockey on the Tongue River in the winters and swam with his sisters in the summer. Bill was nicknamed “Angel” as a child because of his close brushes with death, including a rattlesnake bite, and falling from Tongue River bridge into the river after touching a power line.Bill graduated from Sheridan High School in 1949 having served as Class President and Student Body President. He joined the Wyoming National Guard and was called to serve in the Medical Corp during the Korean War as a member of the 300th Armored Field Artillery Battalion. On June 9, 1951, he saved the lives of four men near Sanghok, Korea while moving through flying shell fragments. He was awarded the Bronze Star with Valor Device. On the 63rd anniversary of Bill’s courageous rescue he passed away. The years in between have truly been a gift from God.When he returned, he earned a degree in Pharmacy from the University of Wyoming. On July 23, 1955 he married Joyce J. Linse at Holy Name Church and together they raised six children. Bill was a successful business man operating several pharmacies in Sheridan, Rawlins, and Douglas, Wyoming and Texas. His compassionate spirit carried over into his work, where he would  trade items and extend credit to customers without the ability to pay for their medicines, knowing full well he may never be paid. After over 50 years of service to the community he retired in 2006.He served as a Sheridan County Commissioner for 12 years, from 1972-1983, with 10 of those years as Chairman of the Board. He was instrumental in expanding the Sheridan County Airport, The County Court House Addition, the building of the Sheridan County Fulmer Public Library and the Senior Citizens Center. County employees received health insurance and retirement benefits for the first time during his tenure in office.He was involved in many other organizations but was most pleased to be a lifelong member of Holy Name Parish and was able to serve as a Trustee. From humble beginnings, Bill was always a champion of the underdog and disadvantaged. His kind and generous spirit was always willing to help others in need. Bill loved reading and vegetable gardening, especially growing tomatoes, and spending time on his ranch. A meal for him was not complete without mashed potatoes. He loved travelling and visited Jamaica, Brazil, England, Italy and Poland.He was preceded in death by his parents, his sister Joan Simmons, brother Jerry Laya, grandson Gus Spanos, and brothers-in-law Richard Pilch & Gordon Simmons.He is survived by his wife of nearly 59 years Joyce (Linse) Laya; His sister Beverly Peckham (Joel) of Sheridan. Children: Dr. Mary Laya, (John Adams) of Seattle, WA; Dr. Joe Laya, (Debbie) of Redding, CA; Dr. Tom Laya, of Sheridan; Valerie Spanos (Jim) of Buffalo, WY; Karen Turner (Curtis) of Sandy, UT; Kathleen Laya (Joaquim Ferrari) of Rio De Janeiro, Brazil. Grandchildren: Katie, Nick and Olivia Spanos; Shelley and Lauren Laya; Jacob, David and Andrew Turner; and Maria Chiara Laya-Ferrari; and many cousins, nieces and nephews.A Visitation will be at 6:00 p.m. with a Rosary at 7:00 on Thursday, June 12, 2014, at Kane Funeral Home. Mass of the Christian Burial will be held at 10:00 a.m. on Friday, June 13, 2014 at Holy Name Catholic Church with Father Ron Stolcis officiating. Interment will be in the Elks Memorial Cemetery. A reception will follow.Memorial contributions may be made to the St. Joseph\'s Society Clergy Retirement Fund at P.O. Box 1468, Cheyenne, WY 82001Kane Funeral Home has been entrusted with arrangements.