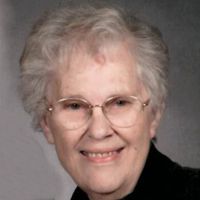 View Service FolderBonnie Jeanne Switzer, 87, of Dayton, passed away on Thursday, April 6, 2017, at her residence.She was an only child, and grew up on the family homestead with her Mom and Dad, cousins, aunts and uncles.Bonnie owned Summerhouse Books in Dayton, WY and she loved to read and spend time with her family, especially her grandchildren. She liked to paint and was very artistic. She also loved to go on trail rides and hang out in the mountains. She married Clarence William “Bill” Switzer on October 15, 1951.Bonnie is preceded in death by her father, Calmer Christian Nielsen, her mother, Hazel Irene (Perkins) Nielsen and her son, Neil Patrick Switzer. She is survived by her husband, Bill Switzer of Dayton, WY, four children, Janet (Rick) Wolney of Paradox, CO, Steve (Anna) Switzer of Clearmont, WY, Carol Bickel of Sheridan, WY and Brent Switzer of Ranchester, WY, along with 15 grandchildren, and many great-grandchildren.Bonnie is remembered by her family as the sweetest lady they\'ve ever known, with a heart of pure gold.A Memorial Mass will be held at 10:00 a.m. on Tuesday, April 11, 2017, at St. Edmond\'s Catholic Church in Ranchester with Father Glenn Whewell officiating. Inurnment will follow in the Dayton Cemetery.Kane Funeral Home has been entrusted with arrangements.