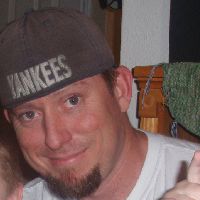 Brad A. Koch, passed away April 7, 2015 in Sheridan, WY at the age of 35 at his residence.Brad was born in Phoenix, AZ on April 9, 1979 to parents Nick Koch and Jayne Scott.He worked in construction. He liked cars, camping, the Raiders, listening to music, and a highlight for him was going to the Rock \'N\' Roll Hall of Fame in Cleveland, OH. He traveled to many places, but had plans for many more travels. Brad enjoyed and loved kids, especially his daughter Lita (her mom, Chrissy Clay) and his son, Kristofer (his mom, Lisa Colwell).Brad was preceded in death by his grandparents. He is survived by his parents, sister Misty (Dan) Poland of Glendale, AZ, brothers Stephen (Heather) Walden of Phoenix AZ, Matthew (Misty) Walden of Phoenix, AZ, children Kristofer and Lita, his adopted “Mom” Kate Taylor of Sheridan, WY, his aunt Debra and uncle John Scott of Hockley, TX, cousins Misty, Jay, David and Matt, and his close friends. Brad was loved very much and will be missed dearly; he will always be in our hearts and memories.A gathering of friends and family will be from 5-7 pm on Wednesday, April 15, 2015 at 1732 Poplar Trail, Sheridan, WY.A Memorial fund to honor Brad will be established for his children.Kane Funeral Home has been entrusted with arrangements.