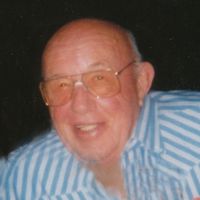 “Bud” Perry was born April 19, 1920 in Eau Claire, Wisconsin to Jess and Hettie Perry. They later moved to Milwaukee, Wisconsin where Bud attended school and upon graduating joined the Army and was a member of the Second Calvary Unit. It was while he was stationed at Fort Riley, Kansas that he met Martha and they married on November 2, 1944 in Milwaukee. To this union four children were born; Nancy (Dennis) Flynn, Judy (William) White, Allan (Laura) Perry and Robert (Sandra) Perry.After serving in the Army, Bud and Martha settled in Waldo, Kansas for a time during which Bud owned and operated an implement business. They later moved to Wyoming and settled in Kaycee where they built a home, moving in 1950.While living in Kaycee, Bud worked at various jobs from Royal Earth Bentonite Company, tended wells for an oil company, and working in the ASCS office, before buying the Kaycee Texaco Station. He also established the “Tally Ho” hunting and guiding business, which he enjoyed for many years. He ran the station until his retirement in 1985, when he and Martha would go to Apache Junction, Arizona for the winter. They continued to do this until the great grandchildren started to come along and decided they needed to stay home and enjoying watching them grow up. Bud and Martha continued living in their home until Martha’s illness dictated that they move in to the Agape Assisted Living facility in Buffalo, Wyoming. Bud continued living there until his death.Bud was preceded in death by his parents, siblings, and wife, Martha, in 2014, and grandson, Frank Flynn in 2008. He is survived by his children, grandchildren and great grandchildren.A Celebration of Life will be held at 10:30, on Saturday, March 14, 2015, at the Jarrard Park with Reverend Jung officiating.Memorials to honor Bud may be made to The Chris LeDoux Memorial Park401 Nolan Ave. Kaycee, WY 82639 Inurnment will follow at the Kaycee Cemetery with a Reception to follow at the Country Inn.Kane Funeral Home has been entrusted with arrangements.