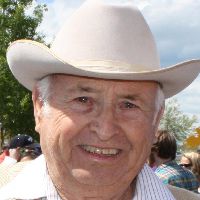 View Service FolderLaVon S. \"Bunny\" Newlon, 83, of Sheridan, Wyoming, passed away peacefully on Thursday, May 21, 2015, surrounded by his family.Bunny was born on January 27, 1932, in Sheridan, Wyoming, to Estell and Mary (Wieseler) Newlon. As a young man, he was an avid horseman and even competed as a jockey for a time.Bunny married Betty Leo in Sheridan on December 15, 1951. Together they raised three children, Cathy, Carol and Jim.In his early years, Bunny worked for Ray Shreve as a ranch foreman and at the Whedon Ranch near Buffalo, Wyoming. In 1958, he received his carpentry Journeyman\'s Certificate. He went on to work as a carpenter for N.A. Nelson Construction and Fletcher Construction. In 1965, he became one of the original owners of K.W.N. Construction Company, along with Perry Kitchens and Tom Warnke.Bunny enjoyed spending time at his cabin on Big Willow Creek in the Big Horn Mountains. Hunting, fishing and snow machining with his family and friends was a big part of his life. Bunny coached his son\'s youth sports teams, and was the local director of the Elks Free Throw Youth Hoop Shoot for several years.In his retirement, Bunny cherished the times he spent with his grandchildren on fishing trips, playing card games and attending their sporting events. He enjoyed playing golf and dartball, and taking trips to Las Vegas and Mesquite, Nevada, and Mexico.Bunny will be remembered for being the life of the party and for his unique sense of humor. Everyone who knew him likely have their own special stories and memories of him.Bunny was preceded in death by his wife, Betty, his parents, sister Opal Streeter, and brothers Ogle Newlon and Dallas Newlon.He is survived by his daughters, Cathy Fortier and Carol (John) Araas; his son, Jim (Colleen) Newlon; his sisters, Pearl Kukuchka, Pat Randall, Ann Roebling and Estella (Tom) Wright; his grandchildren, J. (Melanie) Araas, Jessica (Eric) Araas Kawulok, Michael Araas, Adam (Lindsy) Fortier, Luke (Sandy) Fortier, Audrey Newlon and Anthony Newlon; great grandchildren, Ethan Araas, Blake Araas, Nora Fortier and Mason Fortier; and many cousins, nieces and nephews. He is also survived by Vera Olson, his special and longtime companion, and her family.Bunny was a lifetime member of Sheridan Elks Lodge #520. In lieu of flowers, memorials may be made to Elks #520 Cemetery Fund, P.O. Box 624, Sheridan, WY 82801, or to a memorial of your choice.The viewing will be held at 10:00 a.m. on Friday, May 29, 2015, at Kane Funeral Home. A celebration of life will follow at 11:00 a.m., with Chaplain Randy K. Sawyer officiating. A reception will follow in the reception room at Kane Funeral Home, and interment will follow the reception in the Elk\'s Memorial Cemetery.Kane Funeral Home has been entrusted with arrangements.