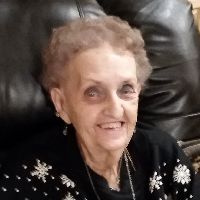 Capitola“Inez” Oliver, 84, of Sheridan, passed away on Tuesday, April 10, 2018, at her residence.Inez was born on March 19, 1934 to parents Joseph Baptist and Capitola Elizabeth Celestine (Roby) Marschang in Sheridan, WY. She married Kenneth J. Oliver on December 15, 1957 in Sheridan, WY.After graduating from Sheridan High School in 1953, she attended L. J. Hinman Business Collage She worked for the Sheridan Credit Bureau for the next 15 years and then the Country Journal for 12 years. But her love was being an Avon Representative for over 40 years.Growing up she loved her horses, polka dancing, hunting, fishing and her pets. Inez enjoyed volunteering as an escort at the V.A., she also baked cookies and cupcakes weekly to take to the VA for over twenty years. She really enjoyed being around people. She was a lifetime member of the VFW Auxiliary, serving as a State Department President, Eagles, Brundage Homemakers for sixty years, Past President of American Legion Auxiliary. She enjoyed spending time with her family and friends.Inez was preceded in death by her parents, her brother Ray Marschang, and grandson Jason C. Marshall. She is survived by her husband Kenneth J. Oliver, daughter Cynthia “Cindy” Marshall , one granddaughter Virginia (Tim) Brewer, grand daughter-inlaw Chrystal Marshall, nine grandchildren, Kayla, Colton, Atalia, John, Jacob, Nathan, James, Rebecca, Elizabeth and three great great grandchildren Shaelynn, Aryonnah, and Brandyn.A Visitation will be held at 1:00 with Services to follow at 2:00 p.m. on Thursday, April 19, 2018, at Kane Funeral Home. Interment will be in the Sheridan Municipal Cemetery with a Reception to follow at the VFW.  Memorials to honor Inez can be made to the VFW Auxiliary, Veteran\'s Support, 758 Broadway, Sheridan, WY 82801.Kane Funeral Home has been entrusted with arrangements.