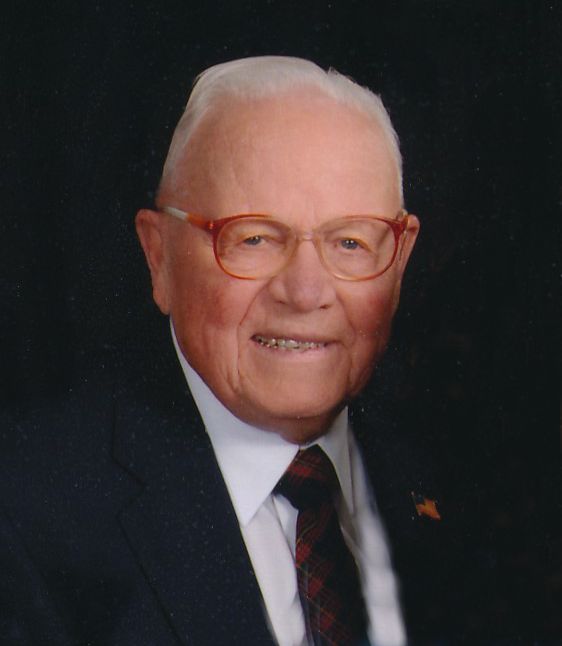 C. LeRoy Johnson, age 94 and long-time resident of Sheridan, joined his Lord and Savior on May 2nd, 2022. He was born January 17th, 1928 in Valley City, North Dakota to Leonard and Emelia “Peggy” (Gustafson) Johnson and was baptized March 4th, 1928 at Ringsaker Lutheran Church. As a young boy, he lived on the family farm, attended country school, and later graduated from Valley City High School in 1946. He received his Bachelor of Science degree in Animal Science from North Dakota State University in 1950.

On October 26th, 1950, he enlisted in the US Army. He was promoted to Sergeant and Staff Sergeant following training in the US and Japan. On Thanksgiving 1951, he entered the Korean War through Inchon Harbor and served on the line at the middle of the 38th Parallel with the Second Battalion of the 180th Infantry Regiment under the 45th Infantry Division. He then transferred to Yon Chon where he served as a prison guard under the Eighth Army. He was honorably discharged from service to his country on October 17th, 1952.

On June 7th, 1953, he married Inez M. Westby at Central Lutheran Church in Pelican Rapids, Minnesota. To this union, they welcomed Meridee, Paul, Bonnie, and Mark. LeRoy’s education and career took him to many places. After working in Austin, Minnesota as a Hormel Company livestock buyer, LeRoy and his family moved to Hettinger, North Dakota where he was a North Dakota State University Experiment Station Superintendent. In 1967, he earned his Master’s Degree in Animal Science from the University of Wyoming, followed by a Doctorate degree in 1972 from South Dakota State University. He then became a Professor of Animal Science at the University of Wyoming where he worked from 1972 until his retirement in 1990. He loved interacting with his students and received several awards for his advising and teaching excellence, including the Lawrence Meeboer Agricultural Classroom Teaching Award, the Elbogen Award for Meritorious Classroom Teaching, and the Mortar Board Outstanding Performance in Academic Career & Personal Advising. During his time at UW, LeRoy traveled with the Extension Department throughout Wyoming and also served many years as Advisor to the UW Wool Judging Team. His affinity for judging wool at county and state fairs throughout the country continued well into retirement.

In 1990, LeRoy and Inez settled in Sheridan where they became active members of Trinity Lutheran Church. He enjoyed volunteering at various events and organizations, including National Day of Prayer, 55 Alive, Sheridan Senior Center, Sheridan College Ag Advisory Committee, and as a coffee host at the VA Hospital. He dedicated many hours to building and grounds maintenance at Trinity Lutheran and delivered Meals on Wheels for more than twenty years. He often said he was “blessed to be a blessing,” and in recognition of his service to others, he was one of four Wyoming finalists for the 2018 national Jefferson Award.

LeRoy was preceded in death by several relatives, most immediately his parents, sister Lorraine, and brother Eldon “Bud.” He is remembered and missed by his wife of 68 years, Inez; children Meridee (Kurt) Piel of Sheridan, Paul Johnson of Buffalo, WY, Bonnie Johnson of Pinehurst, NC, and Mark (Lisa) Johnson of Holualoa, HI; grandchildren Steven (Sara) Piel of Tipp City, OH and Kristin (Matt) Hill of Sheridan; and great-grandchildren Garrett and Madison Piel and Liam and Ava Hill. The family rests in the assurance of the resurrection and rejoices in the real promise of eternal life.

Memorial services and military honors will be held Friday, May 6th, 2022 at 11 AM at Trinity Lutheran Church with Pastor Phil Wold officiating followed by a reception. Inurnment is scheduled for 1 PM at Sheridan Municipal Cemetery. In lieu of flowers, the family suggests memorials be given to the Sheridan Senior Center or Trinity Lutheran Church.

Date:
May 6, 2022
Start Time:
11:00
Location:
Memorial Service for LeRoy Johnson will be held on Friday, May 6, 2022 at 11:00 at Trinity Lutheran Church with Pastor Phil Wold officiating. Military Honors will take place at the church, followed by a reception. Inurnment will take place at 1:00 PM in the Sheridan Municipal Cemetery.
Tribute VideoService VideoService Brochure