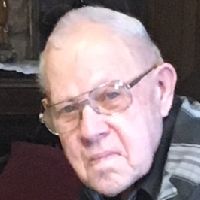 Carl Robert (Bob) Arndt passed away quietly in his sleep on July 18, 2018, at the age of 87. Bob was born on February 27, 1931 to Robert and Thelma Arndt. He spent his entire life ranching in Johnson County. Bob married Darleen Hanson on April 3 1954, they were married for 64 years. Bob was a member of the stockgrowers and woolgrowers as well as a long time member of the NRA. He enjoyed hunting, fishing, and trapping in his spare time. Bob was very proud of his Black Angus cattle and Rambouillet sheep. He was blessed to have had numerous good Border Collie dogs to work with.Bob was happiest when he was spending the summers on the mountain with Darleen on the ranch. He truly adored his grandchildren and was very proud of all their accomplishments. Bob is survived by his wife Darleen, children Cindy Arndt of Wright, Carleen Wagoner (Len) of Plains Montana, Robert Arndt (Dolly) of Arvada, and William Arndt (Lisa) of Cheyenne. His grandchildren, Rocky and Dustin Wagoner, and Wendy, Tory, and Jaycie Arndt. He also had two great grandchildren Carlie and Westin Wagoner and nephews Raymon and Hugh Turk. Bob was proceeded in death by his parents and sister Pat Turk.Bob was very proud to have cut and donated Christmas trees for the Kaycee schools for years. He truly had a soft spot in his heart for children.Instead of donations to a memorial the family requests that you simply take a kid hunting or fishing, or the next time you see a veteran thank them or their spouse for their service to this country. This will truly honor his memory. No services are planned. Bob will be laid to rest on the hill above his cabin in the mountains.Kane Funeral Home has been entrusted with arrangements.