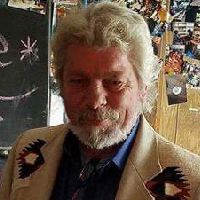 Carl Eric Lindahl September 23, 1956 – September 7, 2017Carl Eric Lindahl of Sheridan, WY passed away on September 7, 2017. Born September 23, 1956, in Manchester, NH, he was a graduate of Central High School and NH Vocational Technical College in Manchester, NH and was a licensed plumber by trade.He is survived by 5 siblings: David “Mike” Lindahl, Ruth I. (Lindahl) Comeau, Paul A. Lindahl from Manchester, NH, “Steve” Lindahl of Epsom, NH and Anna R. (Lindahl) Costa-Turner of Franklin, NH; 2 sons: Eric Carl Zyliak of Helena, MT and Christopher Carl Lindahl of Cody, WY; 5 grandchildren and several nieces and nephews.He was well known for his ingenuity. He was a self-taught guitarist who formed a local band as a young man, and was the original Guitar Hero, even building his own guitars. He was an accomplished amateur photographer whose photos of his son Eric won awards in local shows. He built and rebuilt motorcycles and cars. He came west to Wyoming in his early 30s, and in more recent years, he worked in the construction trade.More than anything he would always state that his two sons were his greatest accomplishment. He never missed an opportunity to express how very proud he was of them and the strong men they have grown into and his Grandchildren whom he loved dearly.Carl was a jokester, an inventor, a lover of animals, and a consistent source of strength to his sons. He lived life on his own terms and never stopped laughing. He was full of life, he loved unconditionally, and would help anyone in need.Donations to Carl Lindahl Memorial Fund can be made at any Wells Fargo Bank using account number: 7094522070 and will be used to cover funeral expenses for Carl’s burial in Manchester, New Hampshire.Please join us for a Celebration of Carl’s Life on Saturday, September 30, 2017, at the Beaver Creek Saloon, 112 N Main Street, Sheridan, WY at 12:00 p.m. Feel free to bring a potluck dish and may contact Toni Grant at 307-674-8181 about food ideas.Kane Funeral Home has been entrusted with arrangements.