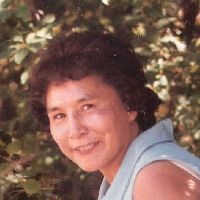 Caroline Yellowtail Houston, 86 of Sheridan went home to be with the Lord on May 13, 2017.  Indian name “Bear in the Timber” was born on April 13, 1931 in Crow Agency, a daughter of Carson & Irene Yellowtail.  She graduated from Lodge Grass High School in 1953.  She then went on to attend Haskell Indian School in Kansas for a year. She returned to the Crow Reservation and worked at the Lodge Grass REA, where she met and later married Francis Brown on December 3, 1954 in Red Lodge.  They made their home on Owl Creek.  Francis passed away April 13, 1964.She then managed the gift shop at the Sun Lodge motel, in Crow Agency, MT.  She met and married David Houston on February 9, 1976.  They made their home in Sheridan, and enjoyed camping, fishing, family gatherings, and traveling, especially trips to Deadwood. She worked at the Trails End Historical Museum for many years.  She worked alongside Margot Liberty who became a dear friend until the end.  She would later work for Margot independently and the two were always checking on each other.  After that she went to work for the Mill Inn, the owner Karen Moody, became a special friend also.Caroline was a member of Mercy and Grace Ministry and the Wyola Baptist Church.  She was affectionately known as Grandma Caroline to many. She loved to visit with friends and family and loved to be around little kids. Caroline also liked to go for car rides and look around at the mountains and scenery.  Everybody was wanted and welcome at her home, and you would never leave hungry.  Grandma greatly missed her loved ones after they passed and they are surely having a great reunion in heaven.  She is preceded in death by her parents;  Carson & Irene Yellowtail, Husband’s; Francis Brown & David L Houston; Sisters Elizabeth  & Eva Lee; brothers; Rudolph, William & Kenneth Yellowtail.Caroline was a loving mother, grandmother and friend who is survived by daughters; Kathy Arnoux (Doug Paulsen) of Aberdeen, Mt & Lana Houston (Brian Abernatha), Son; Stacey Two Bulls (Suzanne) , Stepsons; Troy Houston (Anastasia) all of Sheridan, WY & Richard Brown(Tina) of Billings, MT.  Grandchildren; Michelle Arnoux of Owasso, OK, Danielle Arnoux (Paul Little Light) of Sheridan, Darrell Barnes of Ranchester, Braxton Abernatha of Sheridan.  Great-grandchildren; Carson Arnoux of Sheridan, Caroline Arnoux of Owasso, OK & Dane Little Light of Sheridan.  Brother-in-law; George (Sherry) Houston of Sheridan and Sister-in-Law; Christine Yellowtail of Wyola, MT.  Upon her sister EveLee’s death Caroline took Dixie Yellowtail and her children; Curtis, Eva, Chelsea, Aaliyah as her grandchildren.  Various nieces & nephews including her large extended family of the Yellowtails, Not Afraids, Bends, Moccasins.A Visitation will be held from 5:00 to 8:00 p.m. on Tuesday, May 16, 2017, at Kane Funeral Home. Services will be held at 10:00 a.m. on Wednesday, May 17, 2017, at the Rock Church,  1100 Big Horn Avenue, Sheridan, WY  with Pastor Chuck Gifford officiating. Burial will follow in the Lodge Grass Cemetery.Memorials to honor Caroline to help with  funeral expenses can be made to Kathy Arnoux, P.O. Box 363, Wyola, MT 59089.Kane Funeral Home has been entrusted with arrangements.