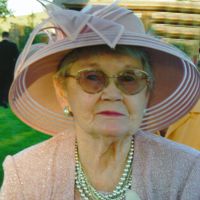 Catherine E. Guyer, 98, of Sheridan passed away October 10, 2016, at Green House Living in Sheridan.  She was born on March 22, 1918, in Madelia, MN, to George and Mae (Rooney) Osborne.  She was one of 12 children.  Catherine attended Mater Dolorosa Catholic school until High School and graduated from Madelia High in 1936.She married the love of her life, Lloyd S. Guyer, on April 12, 1938, and was married to him until he passed away on October 26, 2005 (67+ years).  They had 9 children together, including two sets of twins. Catherine gave birth to the second set of twins in her early 40\'s, at which time she and Lloyd were already grandparents of 7.  Catherine and Lloyd moved to Turlock, CA, with their 3 youngest children in 1963, and moved to So. Lake, CA, in 1964.  They left California in 1982 to live near their 3 youngest children, who had moved to Sheridan, WY. Catherine loved her family dearly and prayed for them daily.  Her faith was her passion in life.  She experienced more loss than any mother should, and it was her faith that carried her through it all.  She was preceded in death by her husband, Lloyd, Her sons, Todd, Larry, twins Doyle and Darrell, her daughters Kathy Averill and Joann Sieberg, her grandchildren, Tracy Sieberg, Lanny Jensen, Jamie Jensen, Serena Guyer and ten siblings.She is survived by her daughter, Sharon, of St. Joseph, MO, and twins, Mark Guyer and Mary Valdez of Sheridan, WY, twenty-three grandchildren, and many great-grandchildren and great-great-grandchildren.A family rosary and visitation will be held at Kane Funeral Home October 20, 2016, from 4-5p.m.  Funeral services will be held at Holy Name Catholic Church on Friday, October 21, 2016 at 10:00 a.m. A reception will follow in the Parish Hall.Memorials to honor Catherine may be made to the Greenhouse Living For Sheridan, 2311 Shirley Cove, Sheridan, Wyoming, 808201Kane Funeral Home has been entrusted with arrangements.