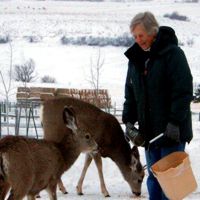 Cecile Helen Harmon, nee Howlett, died peacefully at her home in Sheridan on October 7, 2014, her 75th birthday, of complications associated with Parkinson\'s. She was the beloved wife of Kendrick Harmon, and is survived by her son, Kendrick H. Harmon, both of Sheridan, her brother Leon J. Howlett, of Portage, WI, and her sister Phyllis Abendroth, of Wausau, WI.Helen, as most of her friends knew her, was born on October 7, 1939, to John and Cecilia Howlett of Bruce Crossing, Northern Michigan. She was the grandchild of Finnish immigrants to that region, and was very proud of that heritage. Her primary education was under the tutelage of her two aunts who taught at the small rural school in Bruce Crossing. The family moved to Waukegan, IL in 1945, where she graduated from Waukegan High School in 1957. She attended Northern Illinois University briefly after high school, but left to go to work in Waukegan and later Madison, Wisconsin.Helen moved to Boston, Massachusetts in 1967, where she met her future husband on the Boston Common tennis courts. While in Boston she studied to become a court reporter, and served in that capacity briefly. This career was cut short by her marriage in 1972, after which she and her husband moved to Kailua, Kona on the “Big Island” of Hawaii. Her son was born there in 1974. While in Hawaii, Helen served as representative from the Big Island on an advisory board for Hawaiian Public Media in Honolulu.In 1976, she and her husband moved to Sheridan, WY where her husband helpedmanage his maternal family\'s business. During those years, Helen served as a volunteer at the Sheridan County YMCA.In 1982, the family moved to Cobham, Surrey, in England for 4 years, during which time Helen completed a nine month course in culinary arts at the Tante Marie School of Cookery in Woking. She also spent many happy days exploring and shopping in downtown London.The family returned to the states in 1986, and resided in Denver for a short period before returning to Sheridan in 1990. During the \'90s, Helen served on the Sheridan County Planning and Zoning Commission, and assisted in catering functions in the Sheridan area. Besides being a loving mother and wife, she enjoyed cooking, walking the hills of their property west of Sheridan with her two border collies, feeding animals, reading, and, in earlier days, playing tennis.A Visitation for family and friends will be held from 10:00 – Noon, Saturday, October 11, 2014, at Kane Funeral Home.Donations to honor Helen may be made to the Sheridan Senior Center at 211 Smith St., Sheridan, WY 82801.Kane Funeral Home has been entrusted with arrangements.