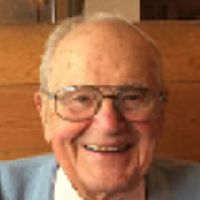 Charles Byron Elmgren, 95, of Sheridan passed away on Sunday, July 10, 2016 at his residence.Byron was born on March 21, 1921 to Carl and Minnie Josephine (Nelson) Elmgren in Benson, Minnesota. People knew him as CB, C. Byron, Mr. Elmgren, but mostly Uncle Byron.Byron graduated from Sheridan High School and the University of Wyoming (with a degree in Geology). He was in the Air Force from 1942 to 1945. During WWII, he was a P-51 Ace serving in England. He received the Distinguished Flying Cross and the Air Medal with 8 Oak Leaf Clusters. He enjoyed old movies, reading, carpentry, hunting, fishing and, especially, people-watching from his front porch. He was a member of the Shrine and served as Potentate. He belonged to the Masonic Order and the Wyoming Geological Association. His sense of humor and twinkling smile are legendary.Byron was preceded in death by his parents, his brother Floyd, and his niece Valerie Pohlhammer.Memorials to honor Byron can be made to the donor’s choice.An informal celebration of Uncle Byron’s life will be held at the Sheridan County YMCA on Saturday, July 23rd from 10:00 a.m. to 1:00p.m.Kane Funeral Home has been entrusted with arrangements.