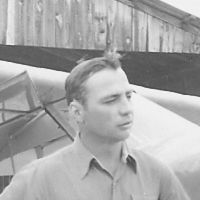 View Service Folder | Click for Video Tribute Charles Helvey died Friday, May 9th at the VA Medical Center with his wife at his side. Charlie was born January 29, 1923 at the old Sheridan Hospital to James Amos and Laura Ellen (Hindman) Helvey. He lived on the family ranch adjacent to the Tongue River Canyon until he was 13 and rode his house two miles to school and back every day. The last year and a half of elementary school were spent at the one room school hour in Kirby, MT where his parents had moved after purchasing the Jim Davis homestead in 1935.Charlie graduated from Sheridan High School in 1941 and shortly after enlisted in the Army Air Corps. After training he was shipped overseas and stationed at Ridgewell Air Base, England where he was the radio operator and waist gunner on a B-17 flying fortress. His first plane was Mispah which was shot up beyond repair and the second was Sleepy Time Gal. He took part in some of the most intense bombing raids over Schweinfurt, Berlin and Wilhelshaven, Germany. He flew 31 missions and was awarded the Distinguished Flying Cross and Air Medal with three oak leaf clusters.. His last mission was D-Day. Charlie was honorably discharged as a Tech Sargent at the end of the war and returned to Montana where he ranched for many years. In the early post war period he broke horses and worked for his uncles at the NX Bar ranch and then took over the family ranch when his father died.In 1956 he married Lucie Lee Skelding, a New York City girl he met at a dance in Birney, Montana several years earlier. They lived at the home ranch for 34 years raising four children and acquiring more land as opportunities arose. Charlie was the first chairman of the Kirby Farm Bureau, a long time member of the Big Horn County Conservation Board, life member of the Sheridan Elks Lodge 520 and spent many years on the Kirby School Board. He was also a member of the Big Horn County Montana Museum and the Big Horn, Wyoming Historical Society. In 1990, due to ill health, he retired to Big Horn and his eldest son took over the family ranch. He was a quiet, unassuming expert cow man who taught all his children a great work ethic. When he was a young father he would work all day on the ranch, collect a lunch bucket that Lee had prepared and work all night on an exploratory oil rig right across the road from the house. If there was one thing he liked better than ranching it was flying his airplane or fly fishing. One year he took all his children, spouses and some of the grandchildren on a fishing trip to Davin Lake, Canada.Charlie is preceded in death by his parents, sister, Laura Lee and brother, John, who died in childhood. He is survived by his wife of 58 years, Lee, his four children; David (Kathy), Laurie, Michael (Rebecca) and Elizabeth (Steve) McClung, six grandchildren; Kaydee Dahlin (Lucas Winter), Tanner Dahlin, Lindsey Helvey, Ty Helvey, Charlie McClung, Caroline McClung and one great granddaughter, Flora Winter. He is also survived by one sister, Nancy Rogers.Our family would like to give special thanks to the staff of the VA nursing home who gave Charlie such wonderful devoted care over the past year. We are very, very grateful to them. Donations in Charlie\'s memory may be made to the Senior Citizen Center, 211 Smith St., Sheridan, WY 82801 or to the Big Horn County Museum, Route 1, Box 1206A, Hardin, MT 59034.A Graveside Service with full Military Honors will be held at 2:00 on Friday, in the Sheridan Elks Memorial Cemetery, May 16, 2014 with Father John Meyer officiating. A reception for family and friends will follow at the Elks Lodge.Kane Funeral Home has been entrusted with arrangements.