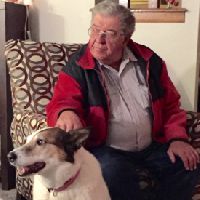 View Service Folder | Click for Video Tribute Charles “Ed” Smith, 68, of Ranchester, passed away on Wednesday, March 11, 2015, at the Sheridan Memorial Hospital with his family at his side.Ed was born on November 4, 1946, in Sheridan, WY, to parents Charles H. “Chuck” and Anne (Kukuchka) Smith. He attended Tongue River High School where he played football. He married Becky Barker in 1975. They later divorced.Ed enjoyed going for his daily drives (making the loop) to watch the elk on the Horse Shoe Ranch. He also enjoyed sitting on his porch watching the birds and admiring his garden, which he took a lot of pride in. His career as a heavy equipment operator was extensive; there isn\'t a road in Sheridan County he didn\'t have a hand in building over the last 50 years. He was most proud of his work on the Bear Tooth Hwy with Kiewit; which they won an engineering award. He was a member of the Elks, UMWA, St. Edmunds Catholic Church and the Operating Engineers Local 400.Ed was preceded in death by his parents; Charles H. and Anne K. Smith. He is survived by his daughters; Melissa (David) Cox of Sheridan, WY and Kellie (Christopher) Stoddard of Stockton, NJ, three grandchildren on the way, siblings; Toni (Peter) Davis of Banner, Teri (Barney) Luskin of Dayton, WY, John (Robby) Smith of Sheridan, WY, numerous nieces, nephews, great nieces and great nephews.A Visitation will be held at 6:00 with a Rosary at 7:00 on Sunday, March 15, 2015, at Kane Funeral Home with Father Brian Hess officiating. A Mass will be held at 10:00 on Monday, March 16, 2015, at Holy Name Catholic Church with Father Brian Hess officiating. A Reception will follow at the Elks Lodge.Memorials to honor Ed may be made to the Elks General Fund at 45 W. Brundage, Sheridan, WY 82801.Kane Funeral Home has been entrusted with arrangements.