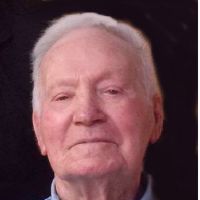 Charles W. Patton, 95, of Sheridan, passed away on Tuesday, February 11, 2014 at the VA Medical Center.Charles was born on May 7, 1918 in Ellsworth, NE, to parents Thomas W. and Nellie (Zauler) Patton. He joined the US Army on December 7, 1941 and served throughout World War II in the Pacific theatre. He was a veteran of the Saipan Invasion. He completed his army service in September, 1945 and married Frances Rebecca Sloan on October 17, 1947 in Sheridan, WY. The couple raised three children together.Charles held many jobs in his long life. He began his working life at a young age, cowboying for his uncle on a ranch near Omaha, Nebraska. He ranched on the Holmes Mesa in Colorado and at Dry Creek near Sheridan. He worked at the Sheridan Flouring Mills for many years, and at Memorial Hospital of Sheridan. Charles was especially proud of his volunteer driver status for the DAV, a position he held in his eighties. He logged more than 150,000 miles transporting patients between Sheridan VA Center and clinics in Billings and Casper. He was a member of the VFW and the American Legion.Charles taught his children, grandchildren, and great-grandchildren to fish. He traversed the streams in his beloved Bighorn Mountains, and knew them like the back of his hand. A rod and reel in his hands was pure magic, and he out-fished most folks on any given outing, all the while displaying the skill and patience of a true fisherman. Charles provided for his family by hunting. He enjoyed golfing and travel in his later years, and, of course, fishing when he could.Family was the most important thing in Charles\' life. He was adored by his children, grandchildren, and great-grandchildren. He took them camping and fishing; he cooked and baked bread for them; and he set a wonderful example of hard work, good cheer, and kindness toward all. He will be missed beyond measure.Charles was preceded in death by his wife, Frances, his parents, siblings, Julia Colerick, William Patton, Leota Dempsey, and Robert Patton. He is survived by his children: LCDR (Ret) Robert (Marlene) Patton of San Antonio, TX; Dona Marie Patton of Monument, CO; and Charles (Marjorie) Patton of Lander, WY; his sisters: Mary (Donald) Hooper of Alliance, NE and Helen (Walter) Young of Alliance, NE. Also surviving are grandchildren: LTC Nanette Patton, Alycia Patton Klein, Francesca Harris, Tom Renish, Eric Renish, Robert Patton, Tim Allred, and Tim Shehane. Surviving, too, are great-grandchildren Suzanne Patton O\'Halloran; Caitlin, Cody, Kyra, and Karissa Shehane; Abigayle and Jenna Klein; Charles Jaye Harris; Robert and Scott Renish; Reed Renish; Sailor Allred and Sapphyra Taylor. Also surviving are many friends and staff members at Mountain View Living Center at Sheridan VA Medical Center who he came to know as a second family.Memorials to honor Charles may be made to DAV Sheridan #9, 306 Esther Lane, Sheridan, WY 82801 or a charity of one\'s choice.Memorial service will be held at 10:00 AM at the Chapel at VA Medical Center in Sheridan with Chaplain Arden Haeffner officiating. In the summer, a memorial service with full military honors will be held at Kane Funeral Home for family members and friends who are unable to travel at this time. Date and time will be announced at a future date.Kane Funeral Home has been entrusted with arrangements.

Date:
Start Time:
Memorial service will be held at 10:00 AM at the Chapel at VA Medical Center in Sheridan.
Location:
Tribute VideoService VideoService Brochure