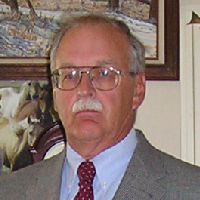 Charles Ainsworth Collins, 73, of Kaycee, WY, passed away at his home on June 6, 2015.Chuck was born on October 4, 1941, to Norman and Ada (Morrow) Collins in Sheridan, WY.He grew up in Arvada and graduated from Arvada High School.  He attended Sheridan Community College where he was student body president.  He received his Bachelor’s degree in civil engineering from the University of Wyoming in 1957 and was a registered Professional Engineer.  Most of his professional career was with the State of Wyoming where he served in leadership positions and finished his career as the Air Quality Administrator for the Department of Environmental Quality.  He also served in the National Guard. Chuck retired to Kaycee in 2006 where he served as a Kaycee City Councilman.  He enjoyed fishing, hunting, reading, hiking, traveling, was an avid sportsman, and lifelong University of Wyoming sports fan.  He was a fearless leader who loved his family.  He was the first of five children to attend college and leave Arvada.  Chuck was a trailblazer who led the way for his siblings and was a mentor and inspiration to his children.Chuck was preceded in death by his parents, his daughter Brenda Newman, and grandson Cian.He is survived by his daughter Lesley (Al) Elser of Woodbridge, VA; son-in-law, Thomas Newman of Cheyenne, WY; siblings, Leslie (JoAnne) Collins of White Bear Lake, MN, James Collins of Buffalo, WY, Mary Jo (Rick) Newton of Buffalo, WY, Patrick (Marilyn) Collins of Cheyenne, WY and his dear friend Pam Kinchen of Kaycee, WY.Services for Chuck will be held at 10:00 on Wednesday, June 10, 2015, at the Episcopal Church in Kaycee. Interment will be in the Arvada Cemetery with a reception to follow at the Arvada Bar.Memorials to honor Chuck can be made to the Cheyenne Animal Shelter, in memory of his daughter, Brenda Kay Newman at 800 Southwest Dr., Cheyenne, WY,  82007.