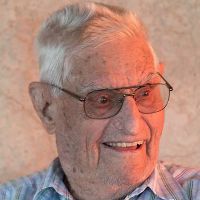 Charles “Chuck” Samuel Mitchell, 102, of Sheridan died peacefully on May 7, 2017 at the Mountain View Living Center at the VA Medical Center with his family at his side.Chuck was born September 21, 1914 in Huntsville, Arkansas to Marshall B. and Martha (Bolinger) Mitchell. His family moved to Clearmont, Wyoming in 1918. After school, he worked on ranches and hauled cattle or whatever else needed to be done.On September 28, 1941, he married Kathleen Carney. During WWII, he served from 1942 to 1945. He was stationed with the 563rd engineer boat maintenance company as a welder and mechanic. Most of his tour was in the New Guinea and Borneo area. He made seven different landings from New Britain to Borneo.His oldest son, Glen, was born in 1942 and the other three children were born after the war – Donna, Margaret and John. Chuck ranched in the Clearmont and Sheridan area until 1950. They then moved to live on a farm in Missouri.In 1961, the family moved back to Sheridan, Wyoming and he went to work for the Sheridan County Road & Bridge, where he worked until retiring in 1980. In 1983 Kathleen passed away.Chuck has had many interests in his life and excelled at whatever he did. He was a Life Member of the Elks, a Life Member of the American Legion and a Life Member of the VFW. He held offices with the Big Horn Mountain Snomads and the Wyoming Snowmobile Association. When he wasn’t riding a snowmobile, he was promoting snowmobile racing and starting the Search and Rescue Program. He was named State Snowmobiler of the Year in 1977. In 1978 he received the Governor’s Award as the Distinguished Snowmobiler of the State of Wyoming and he received the honor of Sportsman of the year for Sheridan County. He was inducted in the Iron Dog Brigade in 1991.Chuck volunteered at the VA for about 30 years with the Elks’ programs.Chuck was preceded in death by his wife, Kathleen, his brother, Kenneth, and sisters, Della Kaufmann and Geneva Chapline.Chuck leaves behind his children, Glen (Jill), John (Cathy), Donna (Bob) Benjamin, all in Sheridan, Wyoming and Margaret (Dick) Fraley, Buffalo, Wyoming. His grandchildren are Kristen Mitchell, Laurel(Scott) Juergens, Don (Stacy) Mitchell, Mike Benjamin, Gina Dodson, Patrick Fraley, Megan Fraley, Jason (Kathy) Shattuck and Audra (Jen) Shattuck. He has 11 great-grandchildren.Donations in his memory may be sent to the Clearmont Historical Group, % Terrill Foster, 4163 U.S. 14-16, Clearmont, Wy. 82835 or the Elks Memorial Cemetery Fund, P.O. Box 624, Sheridan, WY 82801.Services will be held at 2:00 on Saturday, May 13, 2017, at Kane Funeral Home. Interment with Military Honors will be in the Elks Memorial Cemetery with a reception to follow in the Kane Reception Hall.Kane Funeral Home has been entrusted with arrangements.