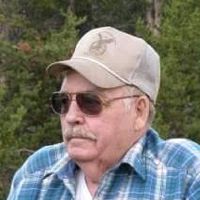 Clare “Sonny” Alvin Richards, 83, of Sheridan, passed away on Saturday, June 11, 2016, at his residence. He was born on July 5, 1932, in Sheridan, WY, to parents Ellis Arnold Richards and Iva Hazel (Babe) Peterson Richards. Raised on a ranch 60 miles north of Gillette, Sonny loved the outdoors and a good horse. Sonny was a teenager, when his grandmother and his mother sold the ranch and the family moved to Sheridan. He worked making and laying concrete blocks and he was one of the workers that built the Dairy Queen in Sheridan. During his lifetime, he worked construction, in the oil patch for many years & also drove the huge trucks hauling oil rigs & equipment all over the western states and Canada. Sonny was also employed in the kitchen at the VA Hospital in Sheridan for a period of time. Sonny enjoyed 4-wheeling, fishing, hunting and camping. In his younger years he was a cowboy, he broke horses and did rodeo. He loved spending time with his family. He was a member of the American Legion, Dry Gulchers, Eagles, Big Horn Mountain Eagles and the Sheridan Liquor DealersA ssociation. He served in the United States Army & was stationed in France from April 1958 to April 1960. Sonny was preceded in death by his wife, Janet, parents, and grandson, Colter McCalla. He is survived by his children; Yvonne (Jose) Carrera of Los Angeles, CA, Mike (Jackie) Richards of Pahrump, NV, Bruce (Brenda) Richards of Leicester, NC, Doug (Honey Bee) Richards of Fallon, NV, Diana McCalla of Sheridan, WY, Christy Forni of Sheridan, WY, Wesly (Anna) Richards of Sheridan, WY, his sister, Barbara (Zane) Cassel of Evanston, WY, and twenty five grandchildren and thirty one great grandchildren. A Celebration of Life with Military Honors will be held on Saturday, July 23, 2016 at 3 p.m. at 2809 W. 17th Street, Sheridan, Wyoming.Kane Funeral Home has been entrusted with arrangements.