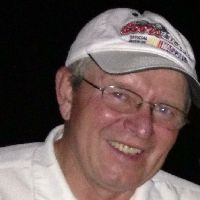 Clark E. Switzenberg, 62 of Mellette, SD, passed away on Tuesday, March 22, 2016 at the Sheridan Memorial Hospital after a courageous battle with brain cancer. Clark was born on April 2, 1953 in Watertown, SD to parents Edward and Shirley (Moter) Switzenberg.  He graduated from Northwestern High School in 1972 and then attended SDSM&T in Rapid City.  He married Connie Oberle and together they had three children.  He lived in the Black Hills area for 10 years and then returned to his home in eastern SD.  He worked for Titan Machinery in Redfield for more than 25 years and became a friend to many through this work.  Many of his co-workers were life-long friends.  Clark will be remembered for being the “boss” and the “old wise one” when it came to pheasant hunting with his kids.  He loved to cook up his fried wall-eye and prepare a breakfast feast for his family. Fishing, going to the races, collecting cars, and shooting trap were some of his favorite hobbies.  When his kids brought him from Aberdeen to Sheridan last month, he was upset that there wasn’t a stop in Deadwood to hit the blackjack table.  He was proud of his kids and enjoyed his grandkids, even though he honestly thought they were spoiled.  He was a no frills kind of guy, except when it came to his 57 Chevy.  Later in life, with his girlfriend Sonia, he learned to splurge a little and enjoyed traveling.  He will be sadly missed by his friends and family members. Clark was preceded in death by his father, Edward and sister, Scarlet Evans.  He is survived by his children:  Jody (Lyal) McCormack of Newcastle, WY; Ryan (Michelle) Switzenberg of Sheridan, WY; Chad (Tammy) Switzenberg of Sheridan, WY; mother, Shirley Switzenberg of Mellette, SD; siblings Rick Switzenberg of Sioux Falls, SD; Sandi (Greg) Young of Hartford, SD; Tracey Switzenberg of Sioux Falls, SD and eight grandchildren:  Dallas, Dakota, Hallie, Kyanna, Anna, Marley, Griffen, and Jensi. Services will be held at 2:00 p.m. on Saturday, March 26, 2016 at N.W. United Methodist Church in Mellette, SD with Reverend Jon Damaska officiating.  A reception will follow at the church and a celebration of his life at the Mellette Fire Hall.Memorials to honor Clark may be made to Shirley Switzenberg, PO Box 153, Mellette, SD 57461.Kane Funeral Home has been entrusted with arrangements.