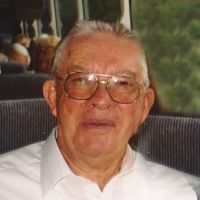 Clifford E KimbleFebruary 15, 1926 – September 8, 2019Clifford Kimble was born on February 15, 1926 in Big Horn, WY to Glenn E and Mary Connolly Kimble, the fourth of six children. His family homesteaded west of Clearmont, WY and he attended school in Clearmont. He was married to Jean Hawkey Kimble on May 15, 1944 and left for WWII service on May 19, 1944 in the Army Air Corps. He was discharged as a Sergeant on May 14, 1946. They lived in Sheridan and celebrated 67 years of marriage. On his return from service he began work at Scales Tractor Co, later at Sheridan Flour Mills, and the last 20 years at the Wyoming Highway Dept.Cliff was active in snowmobiling, ranching, fishing, and loved helping Jean with her activities in Girl Scouts, Akcita Win, the Bozeman Trail/Ft. Phil Kearney and Youth Incorporated. He loved the Denver Rockies and the Denver Broncos, college football and basketball, and thoroughly enjoyed the sport activities of his wife, daughter, son and grandchildren. He and Jean traveled to Europe, Australia and New Zealand, Nova Scotia, the East Coast, a raft trip on the Colorado River and Canada. They especially enjoyed a local wagon train trip riding their own horses. He loved the Big Horn mountains and their cabin there and the state of Wyoming.He is survived by his daughter, Cheryl K Reeves, her son, John Connor Jr. and granddaughter, Haley Connor; his son, Kenneth Kimble, wife Robyn; daughter Heather Westkott and Matt, their son, Adam Barber and Aiden; son, Simon Westkott; daughter, Melissa Westkott;, daughter Jessica Westkott; and son, Alexander Westkott: and son, Korey and Kelle, their son, Kendrick. One brother, Keith, also survives along with several nieces and nephews and one sister-in-law. He was proceeded in death by his wife, Jean, their daughter, Cliffta, and 2 grandchildren. His parents, one sister and 3 brothers also proceeded him in death.The family wishes to thank Dr. David Walker, Hospice Care of Sheridan Memorial Hospital and the wonderful staff and residents of Sugar Land Ridge, whose care was a great comfort to the family.No services will be held for 93 year-old Clifford E Kimble per his request. Donations in lieu of flowers may be made to the donor’s choice.Kane Funeral Home has been entrusted with local arrangements.

Date:
Start Time:
No services will be held for 93 year-old Clifford E Kimble per his request.
Location:
Service VideoService Brochure