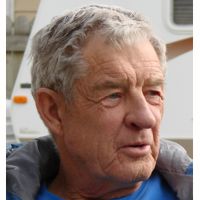 Clifford Nelson Holwell, 77, of Sheridan passed away on Saturday, June 1, 2013 at his residence.Clifford was born on October 18, 1935, in Osage, WY to parents Helen (Larson) and Myrle Holwell. He married Shirley Deutsch on May 17, 1957 in Sheridan, WY.Clifford worked for the Highway Department as a Highway Engineer for 34 years.He enjoyed the mountains, fishing, hunting, camping, motor bikes, taking pictures and snow machines. He was a member of the Immanuel Lutheran Church.Clifford was preceded in death by his parents, and wife. He is survived by his sons: Curtis (Connie) Holwell of Castle Rock, CO and David (Stephanie) Holwell of Gillette, WY, his siblings: Jean Barnes of Casper, WY, Kenneth Holwell of Sheridan, WY and Fred Holwell of Sheridan, WY, and six grandchildren and four great-grandchildren.Private Family Services for Clifford will be held.Kane Funeral Home has been entrusted with arrangements.