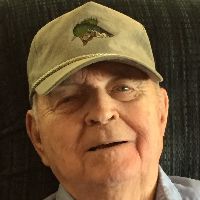 Clinton Edward FoslienJune 24, 1927 – August 10, 2017 Clint Foslien, 90, of Sheridan, died peacefully on Thursday, August 10, 2017, at Green House Living for Sheridan, WY where he spent the last 4 years of his life. He was born June 24, 1927 in Alexandria, MN to Clarence & Eleanor (Ley) Foslien. Clarence died of pneumonia when Clint was only 3 years old and he was raised by his maternal grandmother. At an early age, Clint developed a love for hunting and fishing. He spent all his free time traveling around the local lakes and woods on his bike gathering fish and game for this family; some he traded for more tackle and ammunition, others he turned in for the bounty. During high school, he spent a summer working for the railroad on a rail gang in North Dakota. Clint graduated from Brandon High School in 1945. Immediately after high school, he joined the Navy and served at stateside ports since WWII was winding down. After a year in college, he went to work for a local power company providing electricity to rural areas. He would set utility poles alone without power tools or cranes.Clint married Irma Bitzan on June 8, 1948, in Millerville, MN. The couple lived in Parkers Prairie, MN, until 1958, when they moved to Barnesville, MN. In 1957, he joined the Minnesota Highway Patrol. This career lasted 24 years to his retirement in 1981. During those 24 years, he also owned and operated a boat and snowmobile business.Clint moved to Sheridan after retiring from the State Patrol. He found the Ritz coffee shop and so began his morning ritual of bantering around with newfound friends and arranging for the next outing. With his great sense of humor and funny stories, he just fit right into that crowd. Clint helped many Sheridan “old timers” get some venison for the freezer and enjoyed providing fish to others. To say Clint was an avid fisherman is an understatement.Clint and Irma had 3 children: Bob, Mike and Diane. Following retirement, the couple moved to Sheridan in 1981, and Irma died of cancer in 1992. Clint married Cora Spicer on December 5, 1987, and they continued to live in Sheridan, enjoying their summers in the mountain and wintering in Rockport, Texas for many years. Clint was also a member of the American Legion and the Elks Club.Clint is survived by his wife, Cora; and his 3 children: sons, Bob and Mike Foslien, and daughter, Diane (Karl) Dobmeier, all of Sheridan; his sister; Marvelle Riekse, Santa Ana, CA; 8 grandchildren: Wayne, Michelle, Angela, Jacqui, Wendy, Brandon, Jordan, and Karla; 18 great-grandchildren; 3 great-great-grandchildren; 2 nephews; and stepson, Doug Spicer, and 2 step grandchildren and 1 step great-grandchild.He is preceded in death by his parents; his wife, Irma; brother, Eldon; daughter-in-law, Karen (Lammers) Foslien; and 2 stepsons.There will be a visitation for Clint on Wednesday, August 16, 2017, from 6:00-8:00 p.m. at Kane Funeral Home and also 1 hour before the funeral service. Funeral services will be on Thursday, August 17, 2017, at First United Methodist Church at 10:00 a.m. with Pastor Jim Barth officiating. A lunch will follow at the church following burial in the Sheridan Elks Memorial Cemetery.Memorials may be made to Green House Living of Sheridan, 2311 Shirley Cove, Sheridan, WY 82801.Kane Funeral Home has been entrusted with arrangements.