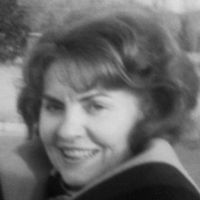 Colleen “Connee” V. Haverty1929 – 2015On the evening of September 22, 2015, Connee passed away quietly in her home in Story, Wyoming. She was being cared for by Dell Haverty, her husband of 62 years and her eldest son Van Vannoy. Connee was 86 years old. Connee was born in Worland, Wyoming on March 27, 1929, to Buster and Alice Hayes. She was the younger of two daughters. Connee grew up on the Hayes ranch in the Thermopolis area, one of Wyoming’s most well-known ranches. She was a true cowgirl through and through. She could ride and handle horses with the best of them. From a little girl on she punched cows and ran mares with her sister Dede and her dad, Buster. She rode her pony 5 miles to a one room country school for her first few grades. Later they bought a house in town to attend school in winter. It was there her social life was busy and full of fun. The family often attended dances and enjoyed music and singing. Connee, Dede and their cousin Eloise, often would entertain the crowds with their talented voices and gifted ability to harmonize. Among other things, Connee won rodeo queen contests for Billings and Thermopolis and the reining at the Denver Stock show on a real ranch horse. In 1953 she married Dell Haverty, who is an Oklahoma City National Cowboy Hall of Fame inductee and 1951 World Champion All Around Cowboy from Benson, AZ. They had a ranch in Arizona where the movie, McClintock was filmed. She doubled Stephanie Powers’ riding in that film. Later they moved to Las Vegas, NV, where, in the days before you could buy accounting software, Connee wrote all the accounting software programs for Howard Hughes for the 5 major hotels he had just purchased. Connee and Dell lived in Vegas over 35 years until Dell retired. They then moved back to Wyoming a couple years ago to live out their years where her roots were. Connee is survived by her husband, Dell Haverty, sons, Van Vannoy, Mike Haverty and wife Diane, and daughters Cathy Ivory and husband Jim, and Shannon Haverty. Connee was blessed to have 11 grandchildren and 17 great-grandchildren that will all miss her dearly. Wyoming lost one of its finest today. We would love for you to Celebrate Connee’s life with us. Services will be held Saturday October 3, 2015 at Kane Funeral Home, 689 Meridian, Sheridan, WY 82801, at 2:00 in the afternoon. A reception to immediately follow at the Sheridan Holiday Inn, 1809 Sugarland Drive, Sheridan, Wyoming, 82801. Proverbs 31: 25 Strength and honor are her clothing; and she shall rejoice in time to come. Kane Funeral Home has been entrusted with arrangements.