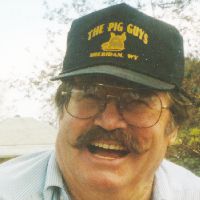 Fred “Dale” Connolly, 87, of Sheridan, passed away on Sunday, April 8, 2018, at his residence following a long battle with cancer. He was born to Elmer and Mary (Buckley) Connolly on December 23, 1930, in Big Horn, WY and was the sixth child of nine.Dale graduated from Clearmont/Arvada High School in 1949, and then joined the U.S. Navy. He married Marian Willey on May 6, 1953, in Buffalo, WY. They had five children and later divorced. Dale later married Loretta Senff, which ended in divorce.Dale loved the mountains. If possible he would live up there forever. He was an avid hunter and fisherman. He also enjoyed snow mobiling with his friends. Dancing to country music was a true passion for Dale!Dale and Burtie Burtis began a pig roasting company that was very popular with everyone. The fun that they enjoyed can not be duplicated. The “Pig Guys” and “Good ole Boys” fed many happy diners! He enjoyed people and having fun. He was most content when he was the center of attention and making people laugh. He could tell a story better than anyone.Dale was a member of the American Legion Post 7, Kalif Shrine and Horse Patrol, the Big Horn Mountain Eagles 4169, and was also a life member of the Elks #520.Dale is survived by his children; Roger (Connie), Jack, Susan (Mark) Howell, grandsons; Ryan and Kasey Connolly, Scott (Jamie) Howell, Jeff Howell, great granddaughter, Luna Howell, two sisters; Mary Etta and Florence and numerous nieces and nephews. He was preceded in death by his daughters; Judy and (infant) Joanne.Most men only know one family but Dale had a second extended family. He dated Carla Browne for thirty three years and was close to her children.Memorials to honor Dale may be sent to the Elks Club Building Fund at 45 W. Brundage, Sheridan, WY 82801 or to the Kalif Shriner\'s Children\'s Fund at P.O. Box K, Sheridan, WY 82801.A Celebration of Life with Military Honors will be held at 1:00 pm on Saturday, May 26, 2018, at the Elks Lodge.A Special Thank You to the Welch Cancer Center for all their caring, love and concern. Also, Thank You to the Hospice of the Big Horns, Dr. Michael Strahan and Rocky Mountain Ambulance.Kane Funeral Home has been entrusted with arrangements.