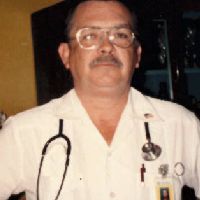 Dalvan Keith “D.K.” Thompson, 71, of Sheridan, passed away on Thursday, July 5, 2018, at the Sheridan Memorial Hospital.D.K. was born on April 25, 1947 to Paul Dalvan and Ladelle Audrey (Ross) Thompson in Greenville, South Carolina. He was very proud of starting a lifetime of service as a 16 year old volunteer fireman. Upon graduation from high school he entered the United States Air Force where he served for 6 years as a radar operator in air recon during the Vietnam War. He was honorably discharged from the Air Force and the same day began serving in the U.S. Army as a Supply Sergeant in West Germany. He later served in the Colorado Army National Guard as a medic.Throughout his life he was employed as a certified welder, a salesman,, an animal control officer, a C.N.A., and an E.M.T., a taxi/limousine driver. He was well-known for driving around town in his 1974 Ford pickup A.K.A. “The Orange Blossom Special.”The greatest part of his life, however, was his volunteer service. D.K. volunteered at the V.A. in Sheridan for 25 years and received numerous awards and certificates for his selflessness. He then volunteered at Sheridan Memorial Hospital from 2006-2015. He was a proud member of Grace Anglican Church and jokingly referred to himself as a “recovering Southern Baptist, confirmed Whiskey-palian, and Steven’s Minister with the Druids.”He was a lifetime member of the Disabled American Veterans and Air Force Sergeants Association. He was proud of his southern heritage and noted that he was the son of a WW II vet, and a descendent of Confederate States of America soldiers.D.K. was preceded in death by his parents, his wife, Phyllis Catherine, and his son Paul. D.K. will be missed by his many friends in the Sheridan community.He will be laid to rest at Black Hills National Cemetery in Sturgis, SD. A memorial service will be held on Wednesday, July 18th at 10 a.m. at Grace Anglican Church with the Reverend Kevin Jones officiating.Kane Funeral Home has been entrusted with arrangements.