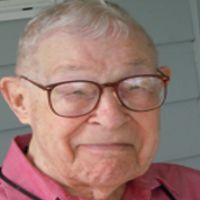 September 15, 1917 – February 14, 2016 Dana Elwood Davis was born to Walter T. and Veta O. (Newell) Davis in Sheridan, Wyoming. He attended grade school in Sheridan and Parkman, WY, graduating from Sheridan High School in 1934 where he served as class president all three years. After graduation he served in the Civilian Conservation Corps, worked in a clothing store in Loop City, NE then returning to Sheridan to work as a public accountant for Willard Doane. On December 31, 1941, he enlisted into the Army Air Corps serving in the South Pacific until 1945. After his military service he married Margaret Joyce in 1946. They lived in Sheridan, where Dana worked as a public accountant, until 1954 when they moved to Laramie with their young son, Walter, so Dana could pursue an accounting degree from the University of Wyoming. Dana served as the Internal Auditor and Director of Services and Auxilliary Enterprises at U. of Wyo. He retired from UW in 1982 and pursued his passion of collecting and building a library of jazz recordings. When asked, he expressed that his greatest accomplishments were earning his CPA certificate; his military service; seventy four years of BPO Elks membership; and his American Legion affiliation serving as American Legion Department of Wyoming State Commander in 1954-55.Dana’s life philosophy was “live and let live” and the tenets of the Serenity Prayer for strength, courage and wisdom. As his family we will miss his matter-of-fact, call-it-like-it-is approach to his challenges and trials of life. We also learned from him kindness, fairness and unconditional love. He is survived by son, Walt (Dee) Davis of Sheridan and step-son Alan (Helen) Wolfe of Centennial, WY. He was G’pa to Erin (Travis) Traub of Sheridan, Beth (Brett) Wheatcroft of Hixson, TN and Anna (Joe) Youmans of Laramie, WY; Grandpa to Kirk Wolfe of Lake Oswego, OR, Kelly Wolfe (Steve Vivona) of Oro Valley, AZ, and Alison (Peter) Wolfe-Murane of Denver, CO; and Grandpa-Great to 11 great grandchildren and 2 great-great grandchildren. He is also survived by nieces Jane Richardson (Dennis Hejduk) of Powell, WY, Heather (Lane) Vanderhoff of Sheridan and Marianne Reynaud of Laceyville, PA. Dana was preceded in death by his parents, his wife, Margaret; brothers, Carl, Leciester, Walter T., Jr. and sisters, Bonita Davis and Evagene Richardson; and niece Margaret Richardson.Dana’s family is very thankful for the kind, quality care he received at the Green House Living facility where he lived for a year and a half. He was also an avid reader and library patron. In appreciation memorial donations in Dana’s name may be made to the GHL facility, c/o Alternative Elder Living, Inc., 2311 Quail Ridge Dr., Sheridan, 82801 or http://sheridangreenhouse.org/donate/), the Albany County Library Foundation, 310 S. 8th St., Laramie, 82070 or the Sheridan County Fulmer Library Foundation, 335 W. Alger, Sheridan 82801.A time of remembrance in Laramie and graveside services in Sheridan will be held at a later date.