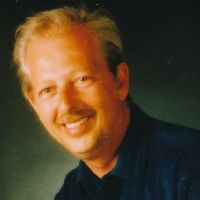 Daniel Timothy Lick, 67, of Sheridan, passed away on Friday, September 30, 2016, at his residence. He was born on April 24, 1949, in Shelby Township, MI, to parents Elsie Leach and Harold Lick. He married Lou “Della” Clayburgh on September 27, 2001.Dan enjoyed cooking, operating the food bank and spending time with the grandchildren. He was a member of the Church of the Nazarene. He started his career in a recording studio in Shelby Township, MI. After that he went on to own a pizza chain of fourteen restaurants. He then moved to Phoenix, AZ, where he opened up his own Wallpaper business. He was always an active member of the community.Dan was preceded in death by his parents and siblings, Johnny Lick, Mary Lick and Suzie Lick. He is survived by his wife, Della, children, Mark Lick, Phoenix, AZ, Timothy Lick of Sheridan, WY, Elvis Lick of Casper, WY, David Jennings of Las Vegas, NV, C.J. Jennings, Billings, MT, Jason Jennings of Denver, CO, James Jennings of Laramie, WY, Crystal Jennings of Sheridan, WY and eleven grandchildren.A Visitation will be held from 5:00 to 7:00 p.m. on Wednesday, October 5, 2016, at Kane Funeral Home. Services will be held at 2:00 p.m. on Thursday, October 6, 2016, at Kane Funeral Home with Pastor Jodi Hampton officiating. Burial will follow in the Sheridan Municipal Cemetery.Memorials to honor Dan may be made to the People Assistance Food Bank, P.O. Box 312, Sheridan, WY 82801.Kane Funeral Home has been entrusted with arrangements.