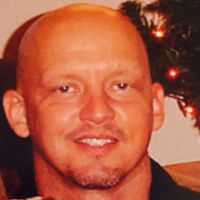 Darrin David WedmannAugust 25, 1972 – August 14, 2015Darrin was born August 25, 1972 to Reinhold and Shirley (Tengesdahl) Wedmann in LaCrosse, WI.He graduated from Mabel –Canton High School in 1991. He continued his education at UW-Stout graduating in 1995 with a degree in Construction Management. He immediately packed up and began his career in construction management in Wake Island. He spent over 4 years in Wake Island. In June of 2000, he relocated to Tampa Florida and began to work at MacDill Air Force base in Tampa. In Tampa Darrin took up running, completed marathons and continued his love of diving, becoming a certified Divemaster. In Tampa, Darrin met and married Wana Donaldson on October 21, 2006. They later divorced, but shared many adventures together and one beloved dog Eddy. Once again, Darrin’s free spirit called him half way around the world. This time to Guam. He took on a management role with Chugach Construction. In 2012 he came back to his roots in Minnesota, spending time with family and making new friends. In February of 2015 he again spread his wings and moved to Wyoming to work with his beloved Aunt and Uncle Kathy and John Tengesdahl. He loved living in Wyoming, working with his Uncle, took up golf and enjoyed the majesty of the mountains.Darrin was a loving, caring son, brother, uncle, nephew and friend. He enjoyed hunting, golf, running, carpentry, travel, diving, tae kwon do, and spending time with family and friends.Darrin passed away in his home on August 14, 2015 after finding peace in beautiful mountains of Wyoming.He is survived by his mother, Shirley of Mabel, brother Dick (Sandi) of Shakopee and aunts, uncles, a niece (Addison), nephews (Cole and Zach) any many friends.He is preceded in death by his father, Reinhold, maternal grandparents, Granville and Margaret Tengesdahl, and paternal grandparents, Fredrich and Herta Wedmann.A Gathering of Family and Friends will be held at 10:30 on Saturday, August 22, 2015, at Kane Funeral Home.Kane Funeral Home has been entrusted with arrangements.