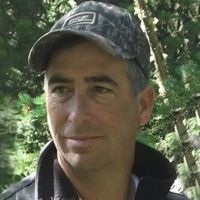 David Plymell, 49, of Dayton, passed away September 29th, 2013, in a motorcycle accident. David spent many hours in the mountains riding with his son Nathan.David was born in Greeley, CO June 3rd, 1964, to Manley Plymell and the late Joan Lemons. In 1981 David moved to Dayton Wyoming with his family. In High school David enjoyed art of any kind. He later graduated from Tongue River High school in 1982.David Spent several years in Las Vegas where he met his wife Maria. They later had two children, a Son Nathan and a Daughter Jena. In September of 2003 David and his family moved to the Sheridan Area where David started working at Bresnan Communications and went then to work for Phillips 66.David’s main passion was his family and his church. He was sealed to his wife and kids the 9th of June 2007 in the Salt Lake temple. His life revolved around spending time with his family in the mountains or just hanging around the house. David loved riding his motorcycles from the time he was just ten years old, he also loved going hunting, caving, camping, fishing, and doing anything outdoors especially when his family was with him. David enjoyed having family and friends over and you could often find him surrounded by people barbequing and having a good time. David was passionate about helping everyone, whenever he met someone new you would always hear him say “I can help you with that.” And he always would.David is survived by His loving wife, Maria Plymell, Two Kids, Nathan and Jenna(Dayton), his father, Manley Plymell (Greeley, CO), step dad, Waford Lemons (Sheridan, WY), a sister Kristi Gleason (Banner, WY), his nieces Kendra Main and Cory Main and a nephew Kyle Gleason all of Sheridan, WY.Funeral Services for David will be held at 1:00 p.m. on Saturday, October 5, 2013 at the Church of Jesus Christ of Latter Day Saints in Sheridan, with President James Boulter officiating, from the Ranchester Branch. Interment will follow at the Dayton Cemetery with a reception to follow at the Dayton Community Club, kitty corner from the Post Office.Memorials to honor David may be made to the Mission Fund of The Church of Jesus Christ of Latter Day Saints at 1066 Big Horn Dr., Ranchester, WY 82839.Kane Funeral Home has been entrusted with arrangements.