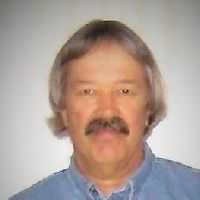 Dean L. Psota, 62, of Sheridan, WY, died at his home in Sheridan of natural causes. Dean was born on August 4, 1953, to John (Jack) and Reva Psota in Ravenna, NE, where he grew up. He was baptized and confirmed at Our Lady of Lourdes Catholic Church in Ravenna, NE. He attended Ravenna Public Schools and graduated in 1971. In 1973, Dean was employed by Burlington Northern Railroad as a brakeman and later as a conductor. He worked for the railroad in Alliance, NE, and Sheridan, WY, for 40 years before retiring in August 2013. Dean enjoyed his family, his friends, hunting, fishing, traveling, and especially his Harley Davidson motorcycle. He liked riding to various destinations and attended the event at Sturgis several times. Dean was also a huge Nebraska Cornhusker and Denver Bronco fan.Survivors include his sisters, Sharon (Larry) Douglas and Bev Moore; brothers, John (Lynda) Psota and Daryl Psota; niece, Steph Goc; nephews, Craig Douglas, Tom Douglas, Kent Psota, Jeff Psota, Jack Moore, and 8 great nieces and nephews. Dean was preceded in death by his parents. Graveside services and inurnment were held in Nebraska with Father Marty Egging officiating. Dean will be greatly missed by his family and friends.Kane Funeral Home has been entrusted with the arrangements. Condolences may be sent to Kane Funeral Home.